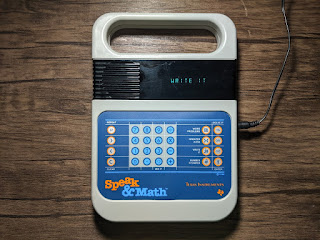 I'm sorry, I know this is the fourth Texas Instrument device reviewed for Calculatober, but come on, they make so many different awesome calculators. I haven't even begun to review their line of graphing calculators yet, and there are still many more that aren't that type.

The Texas Instruments Speak and Math isn't exactly a calculator, but it's still a tool related to mathematics. It was released in 1980 to help children improve their basic math skills. It features five different "games" that cover the principles. I'll discuss each game individually, but first the device itself. 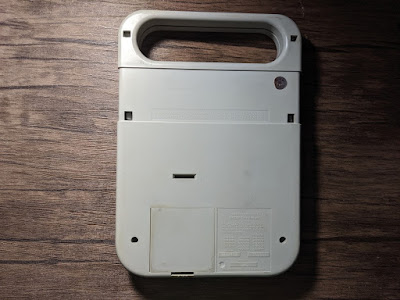 The Speak and Math, or S&M, is quite rugged, built with a thick plastic chassis that is so secure you'd think it was welded if you didn't look closely. Seriously, this thing is tough, as it was clearly designed to withstand the abuse of a child- I mean the abuse a child would put this toy through. 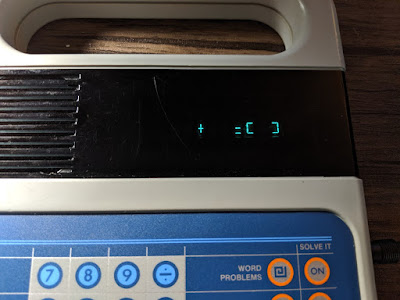 Like most of my favorite calculators, it also has a bright bluish-green fluorescent display. This contrasts well with the black overlay, and overall this device just looks really cool. I think it looks better than the red and yellow Speak and Spell or the positively hideous yellow and green Speak and Read. 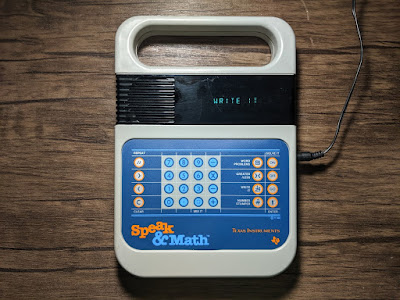 What I don't care for is the membrane buttons. They keep this looking sleek, but I don't like the way membranes feel in use. There's no tactile feedback whatsoever. This was probably an effort by Texas Instruments to keep the buttons free of debris.
Being a "Speak and" toy, this device has a voice of its own that talks through a single speaker next to the display. When it's turned on and before each game, a short electronic jingle plays and I absolutely love it. The sound is unbelievably cheesy and then the voice that speaks sounds like a robot. That's because it's actually synthesized. It's impressive technology for a child's toy.

Anyway, here's stuff about the games. Each game has three levels: 1, 2, and 3. Level 1 games are quite simple, but level 3 can be quite challenging even to someone as dumb as me.
Solve It
The display shows a simple math problem, such as 1 + 9 =, and the voice reads the problem out loud, and then you type in the answer. You can also set it to show division, multiplication, and subtraction problems. It's a basic game, but when I tried playing the level 3 division mode, I was stumped pretty quickly. There were big numbers.

Word Problems
This mode is similar to Solve It, but instead of showing the problem, you only hear the voice say it. It will try to trip you up with things like "if 2 + 2 is 4, what is 3 + 2?" It's silly, but I remember having to answer verbal math problems in elementary school at one point, so I guess it's pretty useful.

Greater/Less
Here you're given either two numbers or one number and a small math problem, and you have to figure out which one is the bigger number, id est "7 + 8 _ 14." If the left side is greater, you select >, and if it's smaller, you select <. It's trickier than it sounds and forces you to stop and think before answering.

Write It
The voice says a number and you type it. That's it. It's not challenging, but I guess it helps kids learn how to write numbers? I just got bored with it very quickly.

Number Stumper
While Write It was the most boring game, Number Stumper is my least favorite on the machine. You have to guess a two-digit number by pressing numbers. The computer voice will tell you if either number is in the hidden number. It's like the game Mastermind (or Codebreaker) but way more basic and way more bad. You only have a limited number of attempt, maybe ten, and it require more luck than skill. Maybe there's a way to play it that doesn't involve luck but I don't care because this game sucks.

I hate to end the game reviews on a sour note, but Number Stumper is the listed at the bottom. 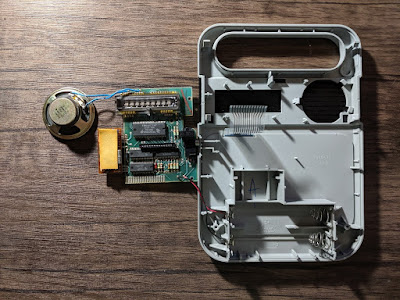 I love the Speak and Math despite not being even close to the demographic it was designed for. I wish I could play with it with the mind of a child in 1980. Would it have blown my mind, or would I have got bored of it within a few minutes? 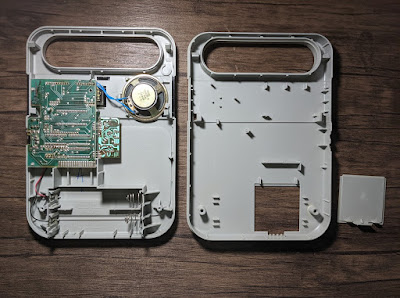 This device uses 4 C batteries or can be plugged in with a 6 volt adapter. I had no trouble using a 12 volt adapter with it. It was released in 1980 for an MSRP of $50, or $155 if adjusted for inflation in 2019. The one I have is in fantastic condition, but I did have to replace the foam in front of the speaker as it had crumbled into nothingness. I've seen these in much worse condition, but this review should stand as a testament to the survivability of this amazing toy.
Posted by calaquin at 8:30 AM