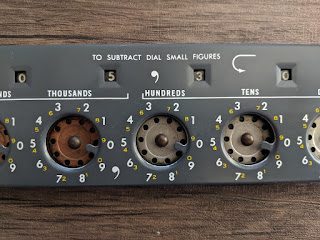 It's day 14 of Calculatober, so we're nearing the halfway point of this amazing adventure. There are a handful of categories of calculators that fascinate me, and one of them is the mechanical type. These incredible machines can perform mathematical functions without the use of a processor and in some cases, without any electricity.
The Lightning Adding Machine from The Lightning Adding Machine Co. In. was first introduced in the late 1940s. There were several revisions, and the one I have seems to be a later version, possibly released around 1956. I don't know for sure, but either way it's still a very old calculator. They were sold for $12.95 with a stand and stylus, which would be over $130 today when adjusted for inflation. I got this one for $9 on Ebay without the stand or stylus.
It feels like a solid block of iron and looks like a part of a coal engine train. Even after having been thoroughly cleaned and oiled by myself, it's still a bit of a struggle to rotate the number dials to perform calculations. This is because a lot of hidden gears are being turned inside. My guess is it works the same way as a previous mechanical calculator I reviewed, the Sterling No. 565 Automatic Adding Machine. That device looks and feels like a toy compared to the Lightning. This one has a lot more digits and thus a lot more gears.
With a lot more digits, you can perform calculations that add up to 9,999,999. This is impressive for a purely mechanical machine that would fit in a purse or a backpack. Even though it's made of iron, it's not particularly heavy either.
The standout feature of the Lightning is its reset function. A piece of metal sticks out to the left side and requires a bit of effort to pull, especially if all of the digits are in use. With a loud click, every number is reset to zero. It's very loud and very satisfying. 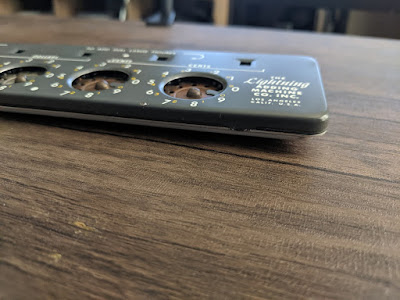 Devices like these are probably the closest I'll get to my Holy Grail, the Curta. But that doesn't mean I don't love and appreciate them. I try to get my hands on them any time I see them because they're such a forgotten treasure of history. 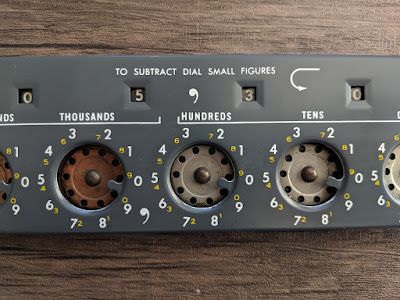