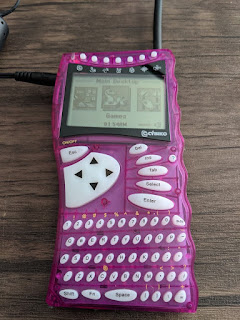 One of my favorite hobbies is thrift shopping. I try to visit all of the thrift stores in my area a few times a month because it's like visiting a brand new store every time. A lot of times I go home empty-handed, but every now-and-then I'll find a really interesting calculator or other electronic device I'd never heard of.
The Cybiko Classic was one such item I found at a Goodwill for $10 still in its original packaging. Its calculator is one of the least interesting features of the device, but because it has one, I feel it's fair to include it in Calculatober. This is going to be my longest calculator review yet. 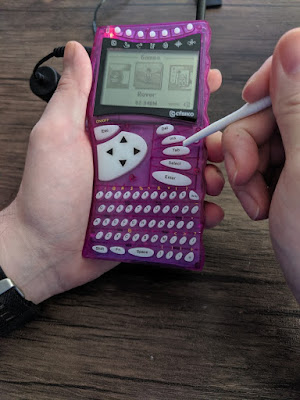 Before getting into functionality, it's important to address the form. The Cybiko is hideous. It looks cheap with its clear pink plastic, and it's accentuated by far too many curves. Button arrangement is borderline nonsensical and there's no sense of order to any of the colors used. The directional pad is easily the ugliest I have ever seen with far more surface area than a d-pad could possibly need.

From what I can gather, it's meant to be held in the left hand and operated using the included stylus with the right hand. It feels awkward and unnatural in a way I can't really explain. I hate it. The buttons are mushy and can just barely be operated with bare fingers, but it's a little easier to use the stylus. This slows down typing significantly though.

I'll go through each category of the main desktop menu in order: 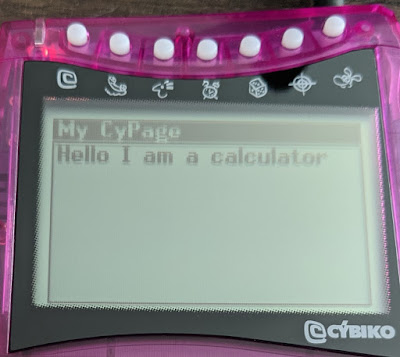 You and Me
This is where you create and store your profile. The idea behind the Cybiko was that it could communicate with other Cybikos wirelessly, so you'd use the profile as a first impression of yourself to nearby strangers. Since no one uses this device anymore, I couldn't find any nearby strangers to meet. Oh well. 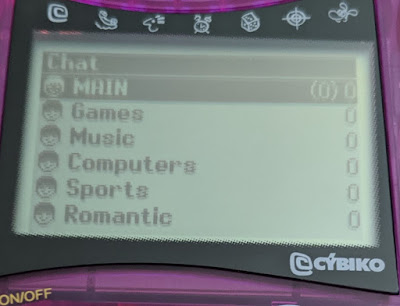 Chat
The chat feature also requires nearby Cybikos, so I am unable to use this. There are several chat room categories and all of them are empty. But I will use this section to point out how unbelievably slow everything is. It's unbelievably slow going from one menu to the next. You have to wait several seconds every time you select anything.

E-Mail
Since I don't have the equipment necessary to get this thing connected to my wireless network, I can't use this feature at all. As stated earlier, typing is tedious so I wouldn't spend much time with this feature even if I could. 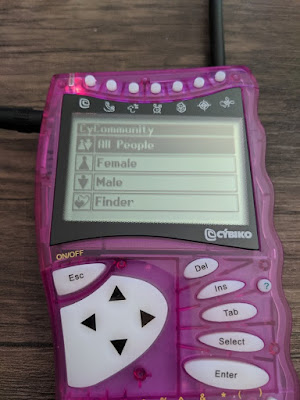 CyCommunity
I guess this is what a dating app would have looked like in the year 2000. You can view other peoples' profiles from here, but again, you need to be near them or on a wireless network to use this.


Applications
Finally, something I can actually use. This category has several subcategories. Let's discuss the non-settings ones:

-Address/Phone Book
Nothing interesting here. It's for saving contact information.

-Graphic Editor
Now this one is pretty interesting, but awful. You can make simple black and white drawings by using the d-pad and enter key. To draw a non-segmented line segment, you'll have to repeatedly press the enter key and an arrow simultaneously. Holding down the arrow key and enter will result in a series of dots. It's neat that the Cybiko has a graphic editor, but all you can do is save or load images to the internal memory.

-Organizer
It's a calendar.

-Text Editor & Journal
Here you can type things and store them into the very limited memory of the device. 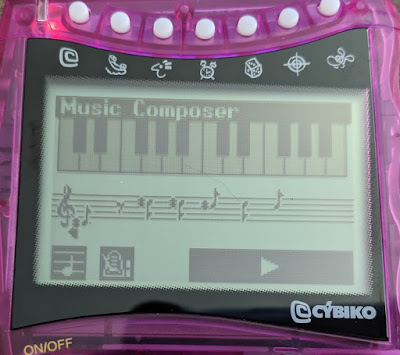 -Music Composer
At last, something kind of interesting and kind of functional. You can compose simple songs with beeps of varying pitch and save them into memory. It's easy to use and might be a fun for a few minutes.

-English-Spanish Translator
If you thought everything else on the Cybiko was slow, this translator is even worse. You can translate single words or phrases from English to Spanish or the other way around. This might have been useful before the age of smart phones, and if you liked other features of the Cybiko, it would be a good thing to have along with it. 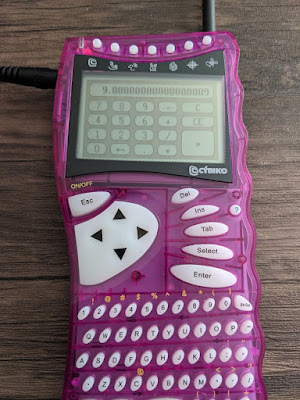 -Calculator
Here we are, the reason for this thing being part of Calculatober. It sucks. The nonsensical button arrangement prevents anything from feeling even slightly intuitive while performing calculations. The pathetic speed doesn't help matters at all. For some reason it shows all of the buttons of a calculator, which would make you think the Cybiko has a touch screen, especially since a stylus is included. Let me be very clear: there is no touch screen on this device. It looks and feels like it should have one, but it does not.


Games
Like any PDA designed for teenagers, of course the Cybiko comes with games. One of the original features of the device was that it would allow you to download one free game every day, but this requires a network connection, so I couldn't do this. I also seriously doubt the company's servers are still active anyway.
I go through several of the games in the video review, and this site isn't a video game review site, so I'll keep it short. None of the games are particularly fun to play. There is a first-person shooter than runs fairly well, and a 3D driving game, but because everything is so slow, the game play is entirely uninteresting. There's no sense of challenge to be found in any of them. The games are slightly more impressive visually than most original Nintendo Game Boy games. That's not saying much.

Final Thoughts
The Cybiko packs a lot of functionality into a small device, yet none of it would have been much fun even back in 2000. If a strong community of users had existed, it would have been a neat way to meet other people. But the Cybiko was a commercial failure that survived just barely over six months. 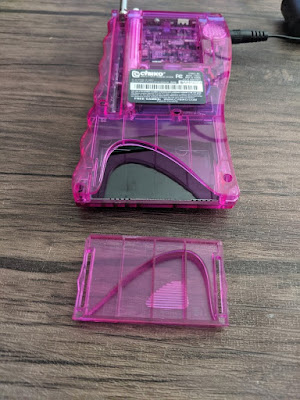 An expansion port on the bottom allowed for cartridges or something to be inserted. The only two I could find that were mentioned were an MP3 player and a 1MB memory expansion. This would triple the amount of power the Cybiko has and apparently there were some games that required this.

Age has not been kind to the Cybiko. The included rechargeable batteries are long expired and of a type I have never seen before. The only way I could use this was by plugging it into an AC adapter. This results in a "No Battery" warning at random times, even during games. 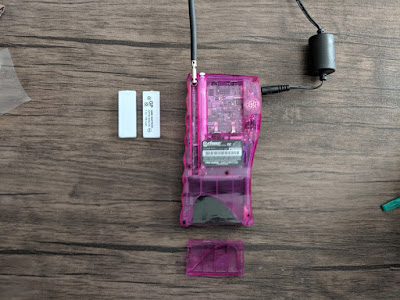 I like to imagine a world where the wireless Internet never caught on and devices like this could have thrived. There could have been a sort of local ad-hoc network of these kinds of devices. That probably would eventually have become the Internet we know today, but it would have been an interesting way to transition to the modern era.

There were two Cybikos at the Goodwill where I found this, and I regret not purchasing the other one. I'd love to test out the networking features to get a glimpse of what life with something like this would have been like.