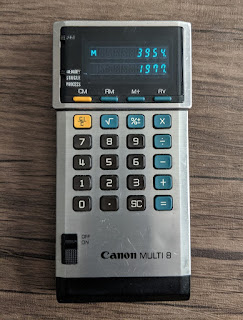 I lied in my video review for this calculator. I said I wouldn't be getting inside of it, but I did shortly afterward because I just love seeing the inner workings of old electronics.
The Canon Multi 8 was released in 1977, but I originally thought it was an early to mid 80s calculator. I thought this because of the dual display, which was not at all common in the 70s, and unheard of for any device with a fluorescent display. It turns out this was the first calculator to ever utilize the dual display.

It's strange that this feature never caught on, because it's pretty useful. A switch next to the display changes what it does. In memory mode, whatever is stored in the memory is shown on the upper display. Process mode shows the total of your current calculation, which is especially handy because you can always know when you haven't made a huge mistake. Single mode deactivates the upper display so it's not very interesting. 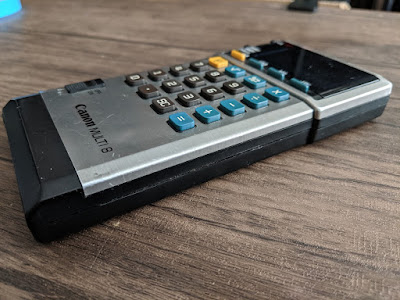 The dual display resulted in a unique look for this calculator. The top is slightly wider than the rest of the device, giving it the appearance of a futuristic scanner. This has no negative affect on the feel of it in your hand.

Buttons are standard fare, but that's not to say they're bad. Far from it. They feel fine and responsive, and their colors fit well with the brushed aluminum front plate. The only issue I have is that the clear memory and cl/c buttons are very close together, so it's easy to accidentally clear the memory when you're starting a new calculation. 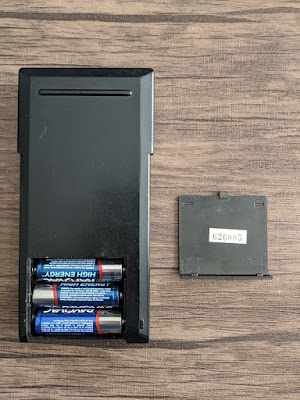 It runs on three AAA batteries, but there's also a port at the bottom to plug it into the wall with a 4.5 volt adapter. 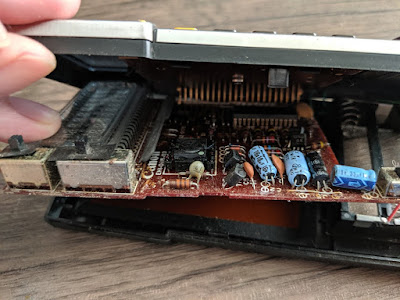 This is another one of those vintage calculators that isn't capable of very advanced mathematics, but because it's so old and so pretty, it's still a great device. These go for $20-$30 on Ebay, but I paid only $8 for this one. It's probably due to the scratches all over it, but these have no bearing on the functionality. This calculator is also quite dirty inside. I'd like to clean it, but I couldn't figure out a safe way to fully disassemble it. No worries though, since it works just fine.
Posted by calaquin at 8:30 AM