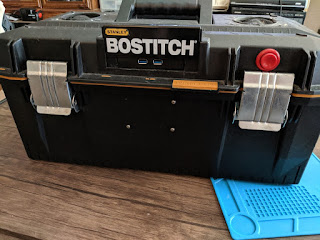 My original plan for the Meet the Machine series was to discuss the vintage computers I have, but for very sentimental reasons, I'm expanding the concept a bit. The computer in this post was built in 2013, but it played a significant role in my life. This is going to be a long post, so buckle in.

I had built a few PCs before this one, so I had a pretty good grasp on it. But those PCs were designed to stay in one place. At the time, I was going on extended trips and thus didn't have access to my Steam library. At first I brought an Xbox 360, which was fun, but PC games allowed for so much more.

So I needed a PC that I could take with me that would withstand a bit of abuse. I expected this thing to be dropped a few times (and it was). I spent a few weeks searching the Internet for PC cases built for abuse and nothing at a reasonable cost turned up. What I did find were some interesting custom cases, but they too were either cost prohibitive or designed more for style than utility.

Then the idea hit me: the Toolbox PC. I could get a rugged toolbox built with strong materials and add shock absorbers to the components.

In the process of researching, I discovered mini ITX boards.
This would be small enough to fit into a toolbox for sure, so it was the first thing I purchased for the build. I also got a power supply, some case fans, and searched parts bins for odds and ends that might prove useful, which they did.

Next was determining a GPU. It too had to be small.
For its time, this was a pretty solid graphics card. It ended up handling pretty much everything I threw at it, just not with the highest settings. For traveling purposes, this would be just fine.

Of course, the most important part of this project was the toolbox itself! It needed to be big enough on the inside to fit all of the components including the mouse and keyboard, as well as any cables I would need. But it also needed to be small enough to fit inside a large travel case I was using. The PC needed to be 100% portable. 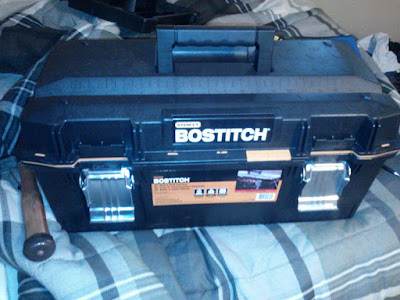 I chose this Stanley Bostitch toolbox that I found at Home Depot for I think around $30. It's 22 inches long, 11 inches wide, and 11 inches deep, more than enough for everything.

Unfortunately, I didn't document much of the build because at the time I didn't have a website or blog nor realize I would one day want to write about it. I did, however, make two posts on Imgur discussing the build.

To put it simply, I absolutely loved this machine. I swapped out some internal components over the following years and made minor adjustments. It served its purpose exactly as I hoped it would. 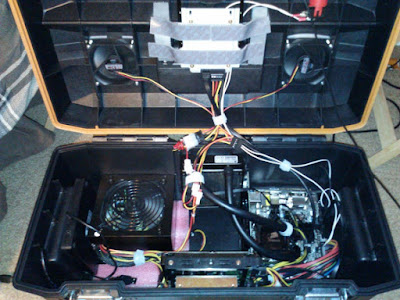 But eventually I stopped traveling and found myself with a bulky machine that took up too much space. I removed all of the components except the motherboard and built another machine with the parts. The Toolbox PC sat in a closet for a while until another major thing in my life happened.

MAGFest. Or Music and Games Festival. While I'd be playing arcade games during the day, at night I needed something for couch multiplayer. The Toolbox PC was revived solely to serve as a multiplayer PC gaming machine, and it once again became an indispensable part of my life.

A few more years passed with the machine getting plenty of use, but then I started to get into retro console gaming and vintage computers.

Eventually the unthinkable happened. I stopped using it again. While it was portable, it became a burden to bring with me to MAGFest as I wanted to bring other things such as retro consoles and cosplay materials. I wasn't using the massive storage box anymore, and this computer didn't fit inside a suitcase.

It was time to retire the Toolbox PC for good. The thought saddened me, but then I remembered I started a Meet the Machine series for my website, so I decided to immortalize it here. I would also document the disassembly to show how everything came together. 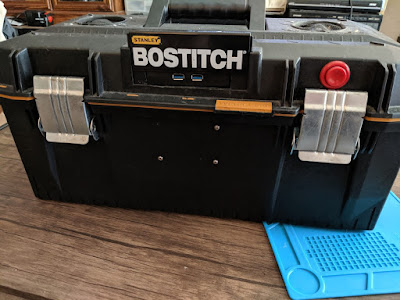 Here it is in its final form. The USB panel is firmly in place and no longer uses Velcro fasteners. 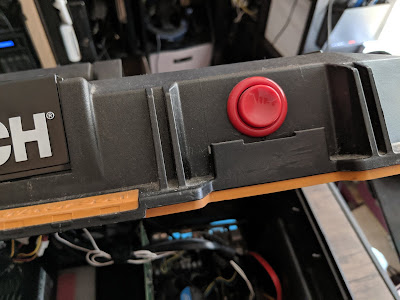 One of my favorite parts of this computer was the arcade button used to power on the machine. I highly recommend this for a custom PC build because it is the most satisfying way to turn on a computer. 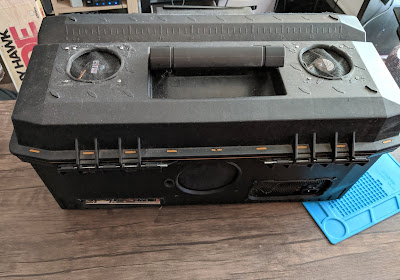 I redid the fans to improve the airflow and reduce dust accumulation, but for the most part the exterior stayed the same. 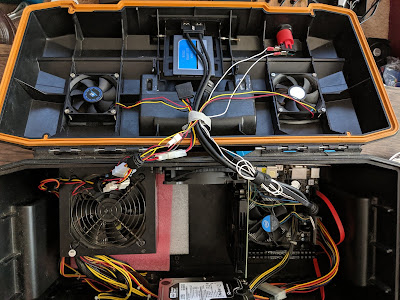 With years of use and abuse, the top of the toolbox could no longer support itself. I had to extend some of the wires to keep them from getting pulled if I accidentally let the top fall. I also removed the liquid cooling system to install in another PC since I knew this computer wouldn't be doing much heavy lifting for games anymore. A standard CPU fan would be good enough. 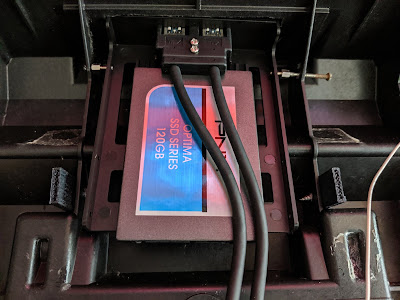 I 3D printed a bracket to hold the USB panel in place, but that broke so I ended up just using bolts to mount it firmly in place. It was an ugly fix, but it worked really well. 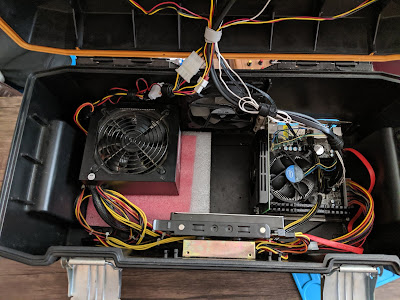 The cables were extended and rerouted to give the internals a much cleaner look. When I replaced the liquid cooling with fans, the wires kept getting sucked into the fan and locking them up, so organizing them was vital. 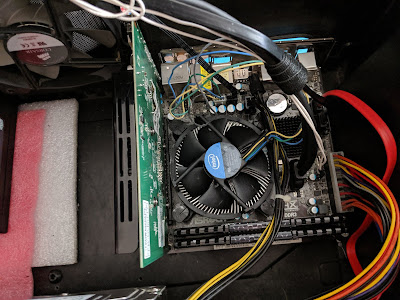 Here's a closer look at the motherboard fitting snugly inside.

Sadly, as much as I enjoyed admiring the work I had done, I knew it was time to take it all apart. 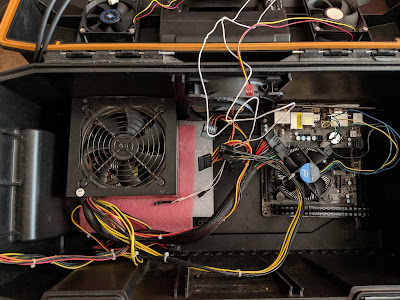 I removed all of the Velcro zip ties and disconnected all of the wires. The hard disk drive was easy to remove as it was only held in place with pins. 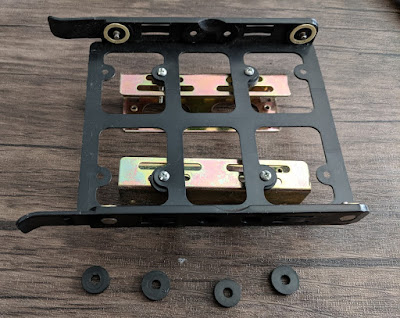 I constructed a shock absorbing system for the hard disk drive using spare parts from another PC build. This allowed the Toolbox PC to fall a few feet with less risk of damaging the drive. 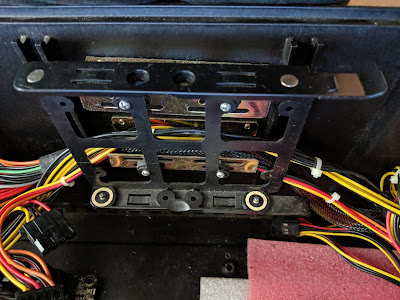 Here it is installed in the box without the drive. The space behind it was plenty enough to route wires through it. 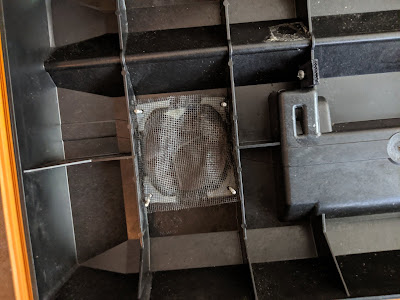 Removing the fans was the most irritating part because they fit so perfectly in the lid. I used screen door screen as a rudimentary filter and it worked pretty well. 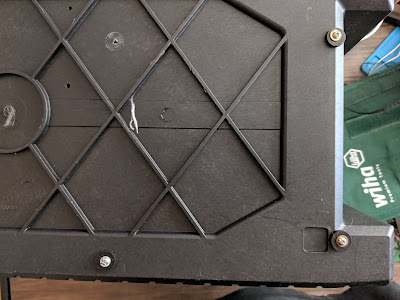 The last thing I removed was the motherboard, which made me remember a big design flaw. These screws scratched the crap out of whatever the computer was on if it ever slid around. I was going to put rubber feet on the bottom of the case but never got around to it. 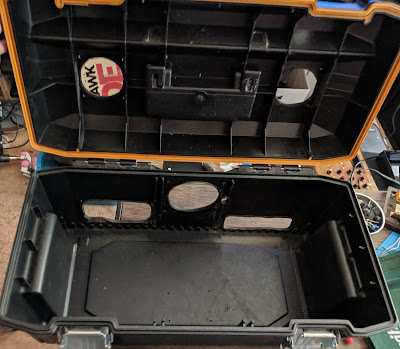 At last everything was removed, leaving only the husk of my favorite computer build. It made a great PC case, but now it wouldn't make a good toolbox due to the large holes. 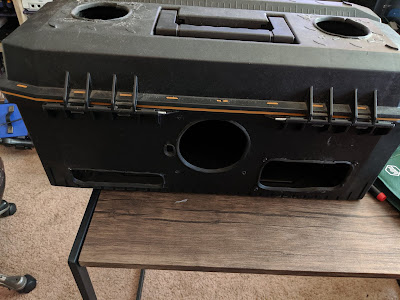 I forgot to mention that I used screen door liner to soften the edges of the holes. This was tedious to install but the results were pretty good.

And here are all of the components, many of which will be used in future projects. They all still work just fine.

While this marks the end of the Toolbox PC, it's also the beginning of my next portable machine build. I still need one of those. The next one won't be put into a toolbox, but instead a very compact pre-built case.

If you stuck through this entire post, thank you. I hope you enjoyed it! If you've built a PC using a custom case or want to, let me know about it. People have done some very cool things.