The first three phases of retr0brighting were intended to be experimental. I wanted to find the best method for me to restore the old electronics in my collection. Unfortunately, as this post will reveal, none of the methods I've tried have proven to be consistent.
For Phase 3, I purchased two 15W ultraviolet lights so that I wouldn't have to rely on unreliable sunlight. 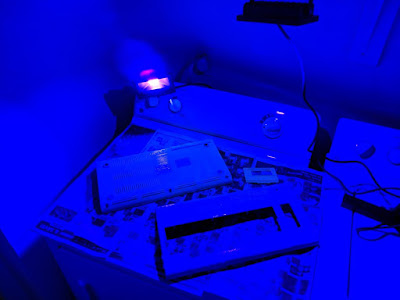 I brushed 40 volume creme over the top and bottom of the chassis as well as half of the printer cover of the calculator. I put all of the parts on top of the dryer in my laundry room and set up the black lights to cover as much as possible.

A few hours into this experiment, I figured I should add another yellowed thing that hadn't been retr0brighted at all and see what kind of effect this setup would have. 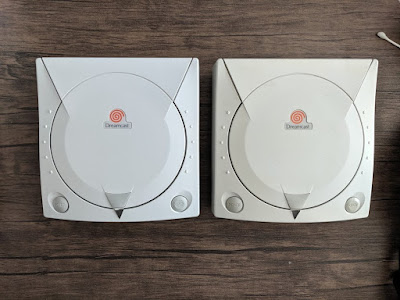 I have two Sega Dreamcasts, one in amazing shape (left) and one that shows its age (right). This would be the perfect opportunity to see if I could restore something back to its true original color with the method. 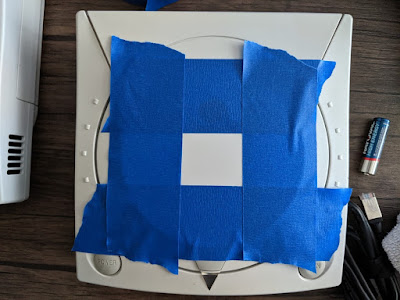 I taped off a section so I could see definite changes, if any were to appear. This square was coated lightly with creme, which may have been the problem later on. 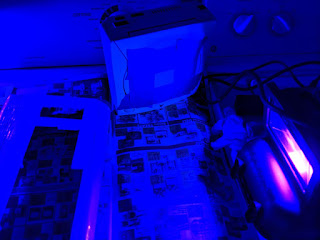 All parts were rotated and the lights rearranged to get better coverage and so I could fit the Dreamcast on top of the dryer. Take notice of the angle of the Dreamcast because this yielded strange results after 20-something hours. 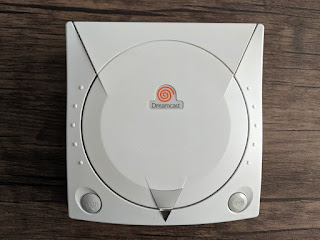 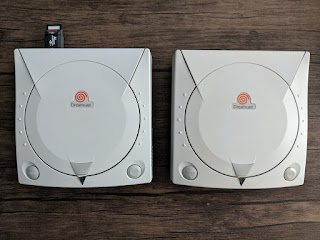 The sectioned off square hardly shows any difference, but the right side of the yellowed Dreamcast is slightly brighter. The side that was hit the most with UV light is more yellowed than the shaded side. My guess as to what happened here is that the UV negatively affected the plastic that wasn't covered in 40 volume creme.

I think the very thin layer of creme I used on the Dreamcast just wasn't enough to do anything useful, but there was a difference. It's hard to see in person, but at certain angles I can definitely tell the sectioned area was brightened. 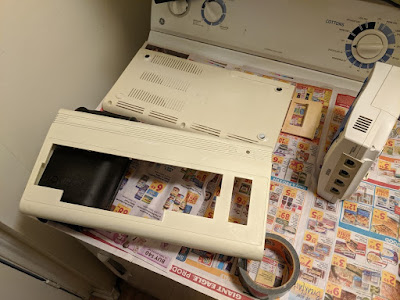 Side note: after 24 hours of checking on this under a black light, seeing this case under normal light was really weird. Here's everything before I washed off the creme.

And this is after, with a picture of the chassis from before on the left. These pictures don't really tell the whole story because the lighting is different between them. For future projects, I'll need to find a way to get consistent lighting between pictures to get a better idea of how well the retr0brighting process works.

Once again, not much has changed on the bottom of the chassis. I'm honestly pretty happy with where it is anyway.

The melted portion on the top of the chassis came out fantastic. There's still a slightly peach color remaining, so I'll hit this lightly with some sandpaper to see if that helps remove it completely. 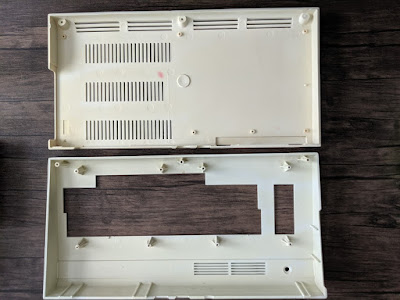 I have not attempted to retr0bright the interior of the chassis at all, but even it has whitened in parts where there was creme. 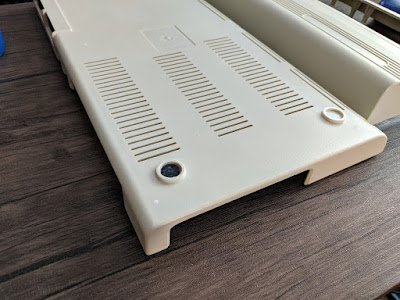 The left and right sides of the top and bottom chassis still need some work because I didn't leave them in the UV light much. 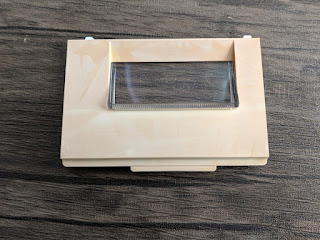 Finally, here's the part from the severely oranged calculator. I only brushed the half beneath the window so I could see definite changes. I wouldn't say it's brighter than the rest, just different. I wonder if this calculator was also in an area thick with cigarette smoke. I'm going to need to find a different method to fully restore this calculator. But I did discover something very interesting during my first attempt to clean it. 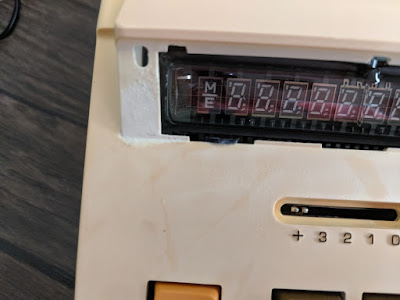 While attempting to fix the plastic panel over the display, I got some super glue on the chassis of the calculator. I wiped it off as quickly as possible, but it revealed the true color beneath the sickly orange. This clearly damaged the plastic, but I wonder if there's an ingredient in super glue that could be used to clean this up.

Anyway, that's all for the Project 64 for now. I still don't have a working board and I'm waiting on some components for my 3D printer to move ahead with the keys. I will need to put this on hold until something of significance happens because there's only so much to say about retr0brighting the same machine. I'd like to use what I've learned so far to retr0bright something else, so once I figure out what that is, I'll write about that.

Thanks for tuning in!