I spend more time cleaning things than I do using them. It's my favorite part of collecting. I want my machines to look as new as I can possibly make them so that I can be proud to show it to others. Also no one wants to touch a filthy keyboard.

After disassembly, cleaning a Commodore machine isn't difficult. With all of the electronics out of the way, you can use soap and water to scrub the heck out of the plastic parts of the chassis. 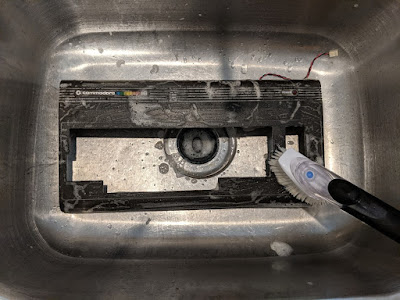 The plastic part holding the LED bulb in place was warped, so I couldn't safely remove it or the wire. I figured it would be okay to get that wet as long as it dried thoroughly afterward. The important thing when scrubbing is to get bristles into the vents to clear out any debris that might be stuck in there. 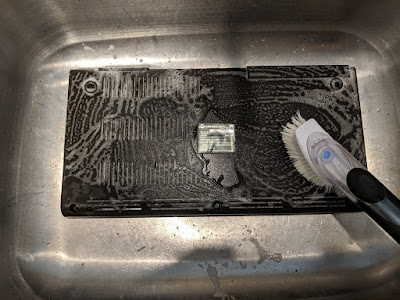 The bottom of the chassis cleans up in the same way, but make sure the label isn't going to be damaged by water. This one is metallic, so getting it wet won't hurt it. Some are made of much more soluble materials, so you may have to either remove it or cover it with tape to protect it.

When I was satisfied with the soap wash, I rinsed both components thoroughly with warm water and set them aside to dry. 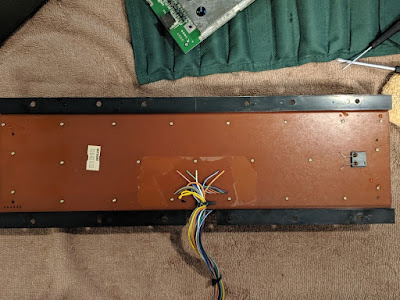 The Commodore keyboard is easily the most annoying part to clean. It's held together with a bunch of screws and you'll need to remove the tape covering the wires. While you're removing screws, you might as well heat up a soldering iron because you need to remove the connectors for the shift lock button. 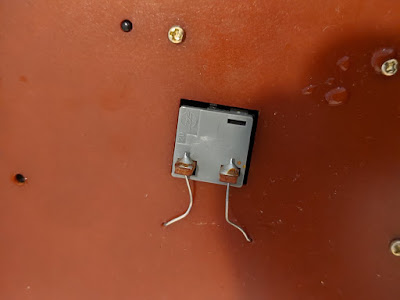 When those are removed, it's safe to take the keyboard assembly apart. 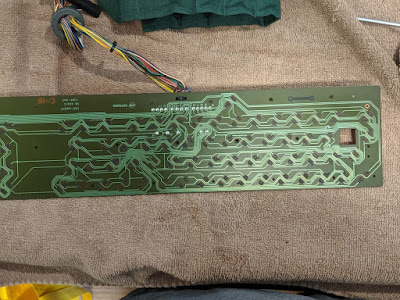 The keyboard PCB is pretty well protected by the other components, so you probably won't need to do more than wipe off a bit of dust. I've never seen one of these in bad condition inside a complete keyboard assembly, but that's only my experience so far. 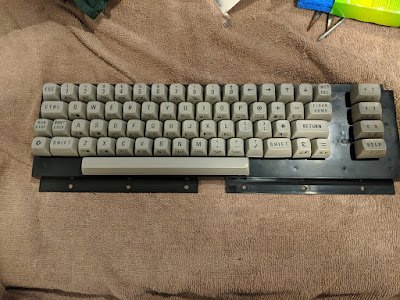 Depending on the condition of the keyboard, you have two options: complete disassembly or wash it like this. Removing the keys can be a major pain, but it will allow you to clean the edges of each key and ensure there isn't any debris stuck in the springs. Be careful with this method because there are a lot of parts holding each key together, so use a bowl or something to hold everything.

This C16 didn't have much wrong with its keyboard, so I left it intact. The spacebar had some scuffs that scrubbed off easily. I cleaned the assembly the same way as the other parts of the chassis: with soap and water. After scrubbing it for a while and getting bristles in every nook and cranny, I sprayed it down with some isopropyl alcohol to get any water that might have been stuck in there out. 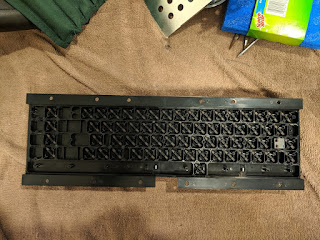 I didn't scrub the bottom of the keyboard assembly because that would risk breaking the components, but it also wasn't very dirty.

All components were stood up vertically to dry overnight. If you're in a hurry, either don't spend time cleaning like this or use an air blower to dry things out.

I've read that some people will put all of the non-electrical stuff into a dishwasher cycle, but the soap and water scrub does a perfectly good job of cleaning and doesn't take nearly as long or use as much water. Also you shouldn't use the heat drying feature of a dishwasher because that risks warping the plastic, so there's really no advantage with that method. 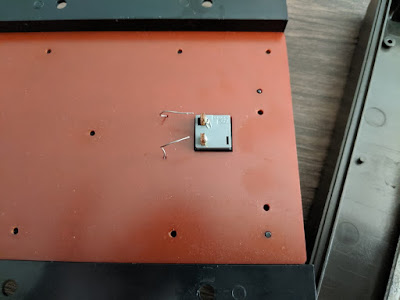 With everything clean and dry, it was time to reassemble the keyboard. While reinstalling the screws, I heated up the soldering iron. 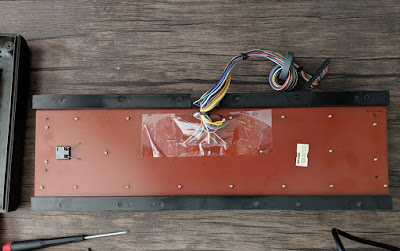 I gave the wires a new strip of tape and that made the keyboard complete. 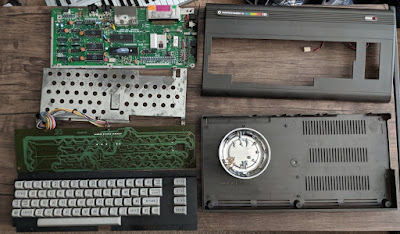 Here's everything on the desk ready for full reassembly. I'm just now realizing I took this picture before assembling the keyboard. 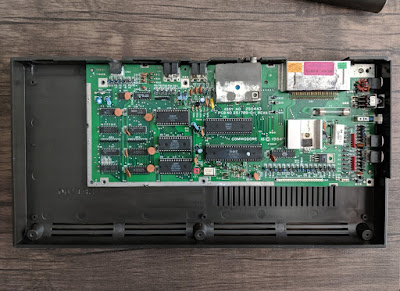 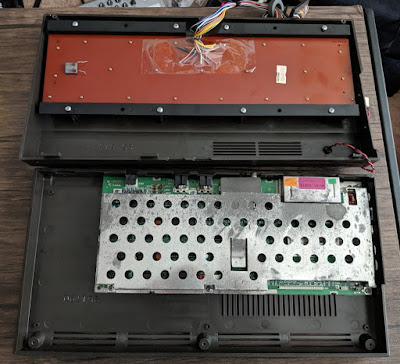 Just moments before putting the entire computer back together. This wasn't a difficult cleanup at all. 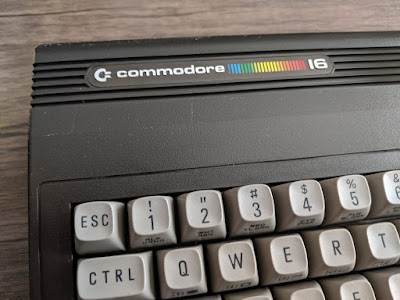 I heated up the label a bit to get it to stick better, but this didn't last long. I'll need to use new glue to make this stick perfectly again. 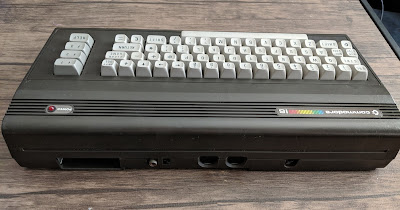 Despite constantly wiping this thing down, a layer of dust kept settling over everything I own. This is the one and only downside of having a pet. 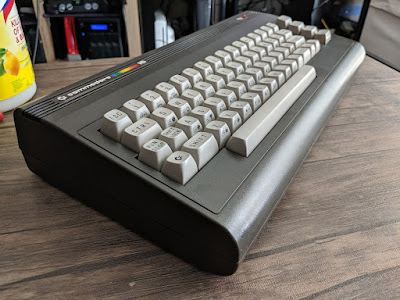 Here are a few glamour shots that show how similar the chassis is to the Commodore 64. 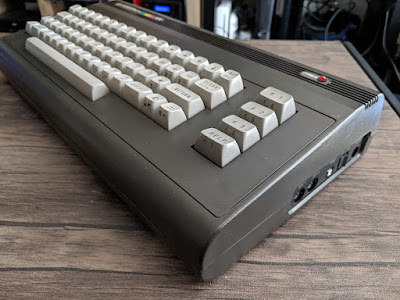 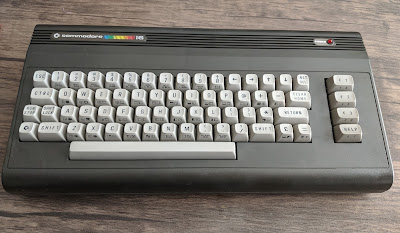 The grossness has been significantly reduced. This is a very clean Commodore 16 now. It still needs new thermal paste, new capacitors, and a better power supply, but it's good enough to display until then.

It's a shame this chassis color is limited to the Commodore 16 because a Commodore 64 would look sleek as hell like this. I'd swap out the grey keys for some dark ones to go for a noir kind of aesthetic.

I also prefer the C16's badge over the C64's. The vertical rainbow stripes look great and more modern than the horizontal kind.

Given that this computer wasn't as powerful or as supported as the Commodore 64, it's no wonder it didn't do all that well in North America. It's pretty hard to find this model for a reasonable price these days, so I'm glad I managed to get my hands on one.

Anyway, that's all I've got for this computer. I hope you enjoyed this post!
Posted by calaquin at 8:30 AM