This may come as a shock to people who know me, but I love robots. I'm the kind of person who immediately feels empathy for a robot in distress despite knowing full well its conscious is just lines of code written by someone. I don't care though because they're great. I'll gladly accept them as our overlords when the singularity occurs. 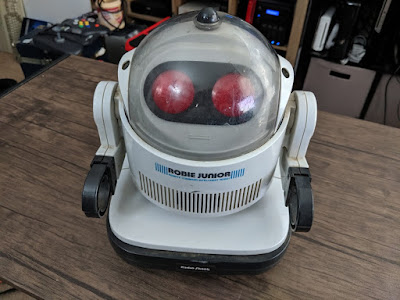 I recently found this Robie Junior Remote Command Intelligent Robot at a yard sale for $5. I knew I had to take him home with me the moment I laid eyes on him, just sitting there mixed in with a bunch of other toys and junk someone didn't want anymore. I had no idea what I was really buying at the time. It was missing a remote control and manual, and it didn't look like it was in great shape, but at the very least it would be a cool thing to have on display.

Upon getting home I did some research to learn more about him. He's a remote controlled toy from 1986 with some neat features. He could talk, follow you, and follow some basic commands. The ad below explains it better than I could.
Adjusted for inflation, this robot cost about $420 in today's money. But that's not a bad price considering what this guy can do. Most impressive to me is its ability to follow people. I don't know how well this actually worked, but I'm easily amazed by things like this. 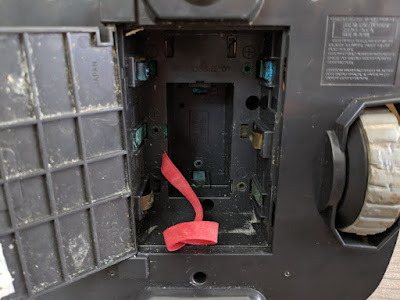 I named mine Mark and took a look inside the battery compartment to see what I was dealing with. If you're not familiar with corrosion, that blue stuff is bad. I tried to wipe it off with some alcohol but didn't have any luck. The corrosion is pretty severe on most of the battery terminals, but I figured it was worth a shot to insert batteries to see if something would happen.

Nothing happened, of course. But a lot of corrosion is hardly a reason to give up on something so adorable. 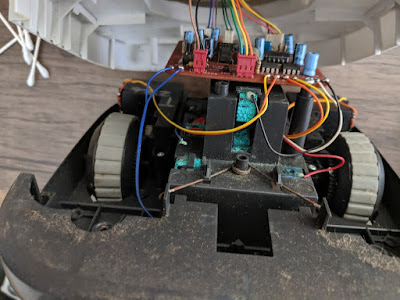 I removed five screws from the bottom to get inside. Radio Shack made this thing pretty easy to disassemble, so I wonder if they were encouraging people to tinker with it. Hard to say considering a lot of older electronics were like this.

Anyway, the corrosion is clearly really bad. If you look at the wire to the right of the left wheel you can see that it's completely disconnected. 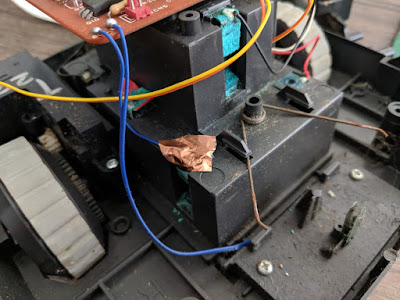 This was just going to be a temporary fix to see if I could get the power working. It didn't work. So my next step was testing the wires and terminals with a multimeter to see if anything was making a connection.

And not entirely surprising, none of the terminals were allowing electricity to flow. So the next step was bypassing them and connecting the positive and negative directly to a battery. 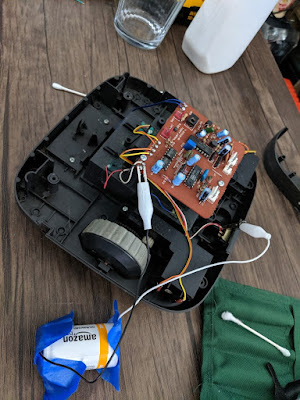 Still, absolutely nothing. Not even the faint whir of a motor or the blink of an LED. Poor Mark has been through too much to give me any sign of life. 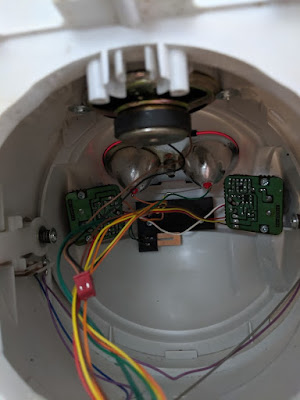 But the components in the upper shell look like they're in good shape. I bet these would work if I could give them power and instructions. I'll need to remove them and test everything individually, but these are very basic components that could easily be replaced. The big concern right now is the main control board and power supply. 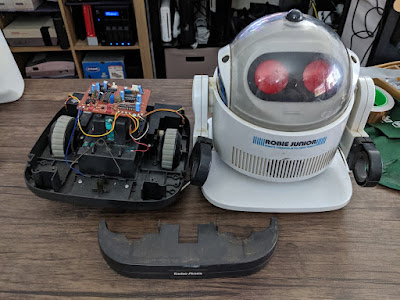 Just look at the little guy. How can you not love those big eyes and its dome head? Mark deserves a better fate than simply being displayed with a bunch of non-working parts.

He also needs a good cleaning. There's a lot of dust and scratches. His luster has long since been lost, too.

Now, my plan isn't just to repair Mark to his original state. I want to give him some upgrades, too. The 1980s didn't have the Arduino or Raspberry Pi, but these could easily fit inside. I had been working on another robot that didn't look nearly as cool as Mark does, so I can scrap that project and use parts from it to fix this guy.

I am not a robotics expert at all, and most of my repairs have been total failures, but maybe the lessons I've learned from those will give Mark a chance. I sure hope so...
Posted by calaquin at 8:42 AM