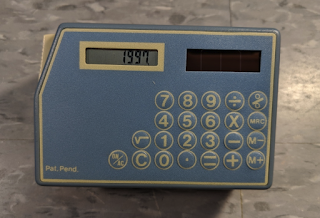 I have a lot of calculators at this point. I think it's safe to say that I have the largest calculator collection in a three-block radius. There's going to come a point where you, as a fan of these reviews, think "we must be getting near the end of his collection by now." And when that happens, you're probably going to be surprised by how long this continues after that initial thought.

Some fans have asked me how many I currently have. To be honest I don't know. I stopped counting a long time ago, but the number back then was pretty large. It's much bigger now. To find out the answer, we're going to have to go on this journey together.

And that journey continues today with the Sonin 10012 Calcu-Tape+ 5-In-1 Measuring Tool, but from this point I'm just going to refer to it as the Calcu-Tape+ because that name is very long. I don't even know why Sonin gave it such a long name.

As the long name implies, this device has 5 tools. I'll review each one.

12 Foot Tape Measure
As the type of person who likes to constantly rearrange furniture, a measuring tape is essential to my everyday life. Upon discovering that there was a calculator with a built-in tape measure, I knew I had to get my hands on one of these. Compared to other non-calculator tape measures, this one is just fine. It locks automatically when pulled out, and a large button retracts the tape. This device only has imperial measurements, but apparently other models also include metric.

Level
Of course I already had a level as well, but this one is neat. It can rotate for 0 - 180 degree measurements. It too works just fine. Having this feature along with the tape measure is nice because now two tools I already had are in one device.

Rotating Angle Finder
So this is actually the level, but this is one of the listed features. You can find the angle of things with it.

Calculator
This is what we're all here for, and I can say that it's okay. The buttons are a bit uncomfortable to press and holding it for calculator use is awkward due to the other features and shape of the device. The screen is very tiny and requires direct light at all times to function. This can be a problem because the button to turn the calculator back on also clears the memory, so if you haven't finished an operation and recorded the results, you'll have to do it again.

With the exception of the calculator, I really like this device. The pastel blue and off-white color scheme are pleasing to the eye, which is unusual for such a utility thing. It's also just as sturdy as a good tape measure or level and I'd be totally comfortable tossing this into a toolbox along with other stuff. I won't, however, because I want to keep it as scratch-free as possible.

It appears Sonin discontinued the Calcu-Tape+, but the company never focused much on calculators. They first released these some time around 1997. I found this one on Ebay for about $12.