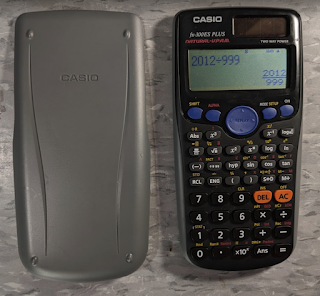 This Facebook review was modified for privacy reasons. It's also inaccurate because this was originally posted a while ago.

Yesterday my brother [REDACTED] and [REDACTED] got engaged, and I'm so happy for them. To celebrate this, I could think of no better calculator to review than the Casio fx-300ES PLUS.

Most of the calculators I own are at least twenty years old, but every now-and-then I come across something newer that is too good and inexpensive to pass up. The Casio fx-300ES PLUS is the third generation of a proud line of calculators often used for SATs and other nonsense academic testing. It's not quite a graphing calculator, but it's definitely not your average statistic or scientific calculator either.

Eight digits is, for some reason, the standard limit for most calculators. It's always interesting to see this limit be different, but what makes the fx-300ES PLUS- as well as its ancestors- so special is that there doesn't appear to be such limit. I typed dozens of numbers in and the screen just kept scrolling over to allow more. In fact you can type in massive equations and this modern masterpiece will handle them.

The scroll function is also a fantastic feature, allowing you to correct mistakes even after running an operation. This is on top of tons of other features that I simply don't feel like reviewing.

Released in 2012, this calculator is by no means vintage. It's made from a strong plastic and every button is clearly visible thanks to outstanding color contrast. It runs on a single LR44 battery and is aided by a small solar cell. I found it at Goodwill in a basket for $4.99.

If you'd like to learn about all of this calculator's features, Casio still has the guide posted on their website. Check it out here: https://support.casio.com/pdf/004/fx-300ES_PLUS_E.pdf