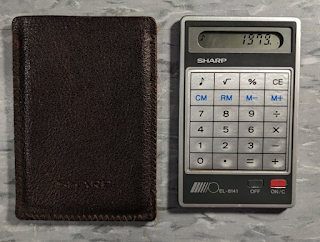 Today is Christmas Eve, which means we're only fourteen days late for Hanukkah! But not to worry, because it's only 311 days until Halloween! To t̶a̶k̶e̶ ̶a̶d̶v̶a̶n̶t̶a̶g̶e̶ ̶o̶f̶ celebrate the holidays, I've got a special calculator to share with you and review.
The Sharp EL-8141 is tiny. It's about the size of a credit card. Even in its leather case, it still fits comfortably in my wallet. Credit card-sized calculators are common these days, but the EL-8141 was released around 1979 and looks better than the devices people hand out for free.

It also feels better than any free promotional calculator. It feels like a solid block of metal that won't bend without a significant amount of effort. The buttons are flat and have no tactile feedback, but surprisingly satisfying to use. Digits display effortlessly on the LCD screen and the calculator has an optional beep to indicate a button has been pressed.

I purchased this calculator specifically because of the musical note button. I thought this was going to be a musical calculator similar to the Toysmith Rock On! Drumkit Calculator. Sadly, this is not the case. That button only turns on or mutes the beeping noises whenever buttons are pressed. Still, it provides some unique functionality you don't always see in a device, especially one this old and this small.

The one notable flaw with the device is its use of two LR1120 batteries. The entire back of the calculator must be removed via a single screw to access the battery compartment, so this probably isn't the best one to take into a situation that requires reliable mathematical operations.

With its sturdy leather case and sleek overall appearance, the EL-8141 is a must-have device for any calculator enthusiast. As previous reviews have suggested, Sharp tends to nail their designs and I've been happy with every device I've looked at so far.