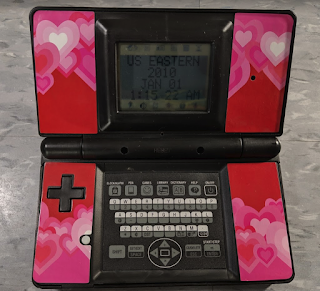 I'm wondering what I'll do with my life when I've run out of calculators to review. I enjoy making this type of content, and the feedback has been amazing so far. As I've stated before, I have been working on some additional (haha) content that doesn't quite count as calculators, and today I have another not-very-calculator thing to review.
It's the Scholastic Electronic Organizer with Dictionary and Radio, from here on out referred to simply as "organizer." At first glance, the organizer could easily be mistaken for a Nintendo DSi, but a closer inspection reveals that this thing is garbage.
The organizer is a bit too bulky to be fashionable, but it comes with two skins for personalization. Mine came only with the hearts so I don't know what the other is supposed to be. Probably something stereo-typically male like dinosaurs, or, I don't know, guns? It's probably blue, too. I actually like the hearts. The red, pink, and black color motif suits the device well from a purely aesthetic standpoint.

Like the Nintendo DS, the organizer comes with a stylus. This stylus is very small and hard to hold comfortably, and its only purpose is to make it a bit easier to press the awful buttons. Several of these buttons don't even work and those that do have to be pressed extra hard. With the cheap plastic used for the construction of the device, every action feels like it's bringing it closer to destruction. Considering this is clearly made for children, I can't imagine these lasted long.

As far as the software goes, it's also terrible. The games aren't fun and the other applications are pretty much useless. The dictionary boasts 30,000 words, but finding definitions is a chore. After painstakingly typing in the word, you're presented with slowly scrolling text that defines the word.

The calculator is equally awful, with the numbers oddly placed and the mathematical operations in an annoying circle that also serves as the directional pad. Side note: you'd think that the directional pad on the left of the device would work like a directional pad, but no, that's for the built-in FM radio. Nothing about this organizer is intuitive.

I hated every moment I was using this device, and it shows in the video review. I've had an easier time browsing the Internet with my Commodore 64 than doing literally anything with the organizer. I never bothered to mess with the radio function because who cares. This is one of the worst devices in my collection and I absolutely do not recommend it.

This was found at Goodwill for $3. Based on later organizers released on Scholastic, my guess is this thing cost $30 when it was available. I can't speak for other devices released by Scholastic, but as far as this one goes, it's not worth buying at any price.