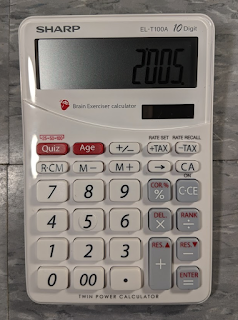 All my life, I've used calculators to solve math problems for me. I don't know the age demographics of my viewership, but I'd venture to guess that the previous statement is true for you reading this. Today's calculator is about both of these things: solving problems and our age.

According to the manual that comes with the Sharp L-T100AB, "your brain functions gradually decline after your 20's." So Sharp set out to address this problem via a calculator. I really wish I could find the year this device was released because I'm fairly certain it had to be around the time video games such as Brain Age were at the peak of their popularity- around 2005. This definitely doesn't look like something that existed before the 2000s, so I'd place the release some time between 2005 and 2010.

But I'm getting ahead of myself. The EL-T100AB is the follow-up to the EL-T100A, which was functionally identical. In fact the manual that came with this calculator refers to it as the EL-T100A. It features a very large LCD screen for its size, and large buttons to match. This is the kind of calculator that focuses heavily on ease of use, yet it manages to look good doing it.

The buttons feel fantastic, and so does the rest of the calculator. It's made of plastic, but this is a very strong plastic that has little give when I try to bend it. Like other Sharp calculators I've reviewed, this one lives up to the quality that I've come to expect from them.

At the top of the buttons are two keys that change everything: Quiz and Age. These bring you to a little game that has you answering simple math questions as quickly as possible. You can choose either 25, 50, or 100 problems to solve. When you make a selection, a countdown of three seconds leads to either addition, subtraction, or multiplication questions.

After you finish the quiz, you're presented with a percentage of correct answers and the time it took you to complete it. Pressing enter again gives you your "Brain Fitness Measurement" in the form of years. In one of my runs, I got 92% of 50 questions correct in 1 minute and 41 seconds. This gave me the score of 51 years. That's disappointing, but with practice I could certainly improve.

The calculator even keeps track of your highest scores, allowing you to keep track of your progression. It's all surprisingly fun and it works well.

I found this device at Goodwill for $8. Sadly, it appears Sharp has discontinued this device and I haven't been able to find any official retailers who still sell it. I almost feel bad for removing this device from its original packaging but let's be honest this isn't going to be high on any collector's list.