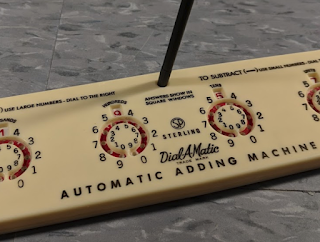 If you've been following these reviews since I started this website, you've probably noticed I'm especially fond of vintage calculators. Some of my most exciting moments have been finding or receiving devices from the 1970s and early 80s. I want to preserve these calculators because they're an important part of history and I think they're cool.

While not my oldest calculator, the Sterling No. 565 Automatic Adding Machine definitely counts as vintage. Released some time around 1960, it was one of the first calculators made entirely of plastic. Despite this, the device has held up remarkably well. The white plastic has yellowed slightly, but remains sturdy and nearly unblemished.

The Sterling Adding Machine is a simple device, using a series of gears and levers to make simple addition and subtraction calculations. The instructions are printed on the back of the box, making it easy to learn and use. To add, simply input a number using the large numbers around the dials, and then input the number to be added to it. Subtracting is only slightly different, as you rotate the dials counter-clockwise and use the smaller numbers inside the dials.

Despite being well over sixty years old, the calculator still works perfectly. Dials rotate smoothly and I have no trouble performing calculations with it. The included stylus doesn't appear to be the original, but it works fine. A mechanical pencil would also fit nicely into the small grooves.
I really wish I could safely take this device apart to show the inner workings, but the plastic is sealed tightly. I don't want to risk destroying the calculator because like any very old thing, there are a limited quantity of them left.

I found this calculator on Ebay for about $8 and it's a pleasure to have it placed in my display among other beautiful and historical devices.