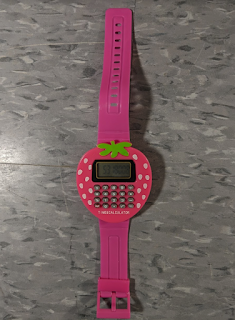 Hello again! Taking a week off from calculator reviews gave me a chance to work on some other neat stuff that I'd like to eventually turn into content for this site and my Youtube channel. I don't know when you'll start to see that stuff, but I'll get to it some day. More importantly, on to the first calculator review of the week!

I know what you're thinking: this is going to be another terrible calculator. I'll be honest; I thought so too. It's made of cheap plastic, has a crummy gimmick, and is clearly just a crappy thing you can get for like a dollar on Ebay. All of that is true. Yet, I actually really like the R Time Sport Watch.

I don't have particularly thick wrists, but usually children's watches don't fit me. It's one of those things I came to accept in life. I had this great Spongebob Squarepants watch that I always wanted to wear but it's just too small and no watch repair shop was willing to resize it for me because it was clearly a McDonald's Happy Meal toy.

So when I purchased the R Time on Ebay, I fully expected to be disappointed yet again. Amazingly, after several months of waiting for it to arrive, I discovered that it actually fit. The band has no give due to it being made of this weird flexible plastic, but there's enough of it for it to work.

Then there's the calculator functionality. I thought the buttons wouldn't work properly, if at all. They're very tiny. Yet in practice I'm proven completely wrong about this. The buttons feel nice to press and are spaced just far enough apart to comfortably press them individually.

The LCD display is perfectly serviceable as well, visible from multiple angles with plenty of contrast. It's not solar powered, but accessing the battery is simple enough. You can easily remove the back portion of the watch to get to it.

For $1.83, I have few complaints about this device. It's stylish, simple, and it works just fine. It's no Casio calculator watch, but those are proving difficult to find for a price I'm willing to pay. For now, I'm okay with settling for this nice strawberry-shaped calculator watch.