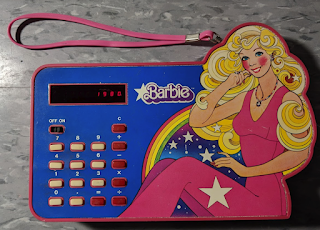 If you've been alive, you've probably noticed that things have changed. One thing that I've noticed that has changed is Mattel just isn't really a big deal anymore. I grew up on Hot Wheels while girls had Barbie I guess. These things still exist, but they haven't been in the spotlight like I remember.

Anyway, I found this Mattel Barbie Calculator for $9 on Ebay. It was originally sold in 1980 and I think it was attempting to resemble a purse for young girls to carry around. Most of the inside is empty space, but the only way in is by taking out four screws to open the device. It's a peculiar design, but it definitely has a charming quality to it.

As a calculator, this one is fantastic. Seriously. The buttons are clicky and loud thanks to the device being so hollow. It sounds and feels great. It also uses red LEDs for its display, which is always a plus for me. The calculator doesn't have any particularly unique features, but it handles simplicity with aplomb.

I really like the hot pink exterior and the bright, vibrant drawing of the 1980s Barbie. It's such a colorful calculator that really should look gaudy, but it somehow manages to look quaint as well. The Barbie calculator has aged gracefully, unlike Barbie herself. I don't know, I haven't followed the brand in ages.

The Barbie calculator runs on a single 9 volt battery. It's a cool addition to my collection.