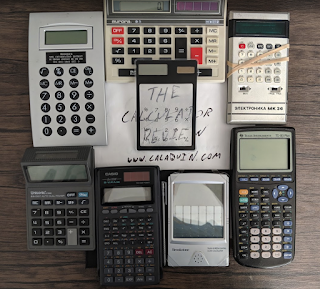 In addition (haha) to my reviews, I've been wanting to discuss other aspects of calculator collecting. This is the first in what I hope to be many posts about this amazing hobby that has brought myself and others so much joy.
In several of my videos and reviews, I've mentioned what happens to the calculators I've covered. I have five different locations to store them. There's the Wall of Fame, where I put the best handheld devices and see them first thing every morning. I have a display case for my most interesting items (not just calculators) and that's where a lot of the truly fascinating devices go. There's also a shelf where I store larger calculators that don't fit on the Wall of Fame but aren't cool enough for the display case. I've also mentioned the "Box of Lame," which is a cube storage thing where all of the terrible calculators go. I like to keep these out of sight for the most part.

But the fifth storage location is today's topic, and that is the Calculator Graveyard. It's more of a bag than a location, actually.
When purchasing calculators at thrift stores or even Ebay, I occasionally get something that doesn't work. Sometimes they don't survive shipping, other times they have horrific battery corrosion, and many were simply donated to Goodwill in a non-working state. I attempt to fix all of these, but I'm not an expert and I don't really know what I'm doing.

Then there are times when I get a perfectly functioning calculator and take it apart before writing a review. Sometimes I make a mistake and cause irreparable damage. It's devastating.

In any of these situations, I don't just throw the devices away. Instead, they're added to the Calculator Graveyard in the hopes that maybe some day they can be resurrected or stripped of parts for the benefit of another calculator. Ultimately, many of these will probably be taken to an electronics recycling center, but the bag isn't quite full yet so I'm in no rush to part with them. 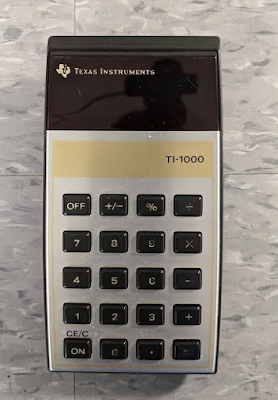 The TI-1000 was purchased in the early days of my calculator collecting, before I even dreamed of the idea of writing reviews. I found it at Goodwill for $4 but saw that it wasn't working quite right. Still, I took this piece of history home with me hoping to fix it. Sadly, the internal components were so worn and damaged that I ended up discarding them. I kept the shell because it still looked cool and maybe I could use it for a project of some sort. 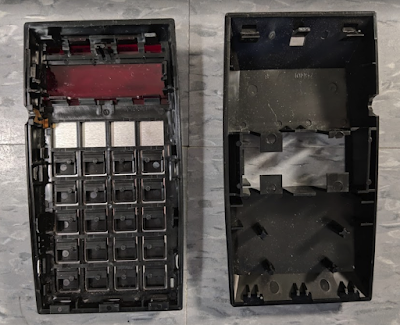 Fortunately, I found another on Ebay for a reasonable price and it's one of my website's earlier reviews. Check it out here. 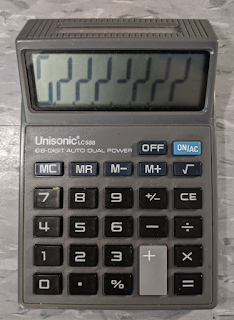 In the case of the Unisonic LC588, I didn't give it a thorough testing before purchasing it at Goodwill for a few bucks. I turned it on and saw a zero, and that was good enough for me. It wasn't until I got home that I discovered the display had some serious problems showing digits. 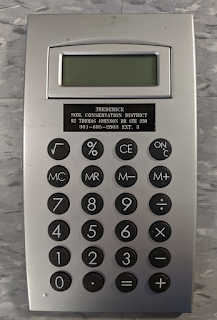 This calculator was working fine when I got it, but when I disassembled it for the review, the ribbon connecting to the display broke and I was unable to repair it. I did end up finding a similar device and wrote a review for it. Check it out here. 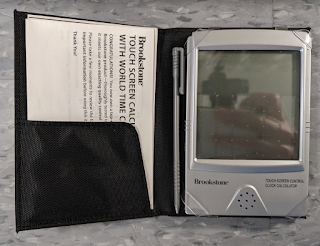 Another calculator that was in perfect shape when I got it. Like the curved calculator, I disassembled it and broke the extremely thin ribbon connecting to the display. I was very upset with this because it seemed like a really cool device and I was excited about sharing it on my website. I hope I can find another some day. 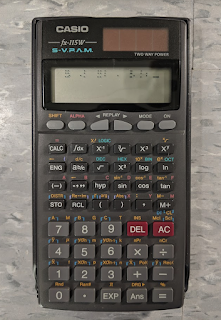 I love Casio calculators, so finding this one for 95 cents at a book store was big for me. Unfortunately, the display doesn't show numbers so it's impossible to use. The good news is that this device is similar to the Casio FX-300ES Plus, which I previously reviewed. 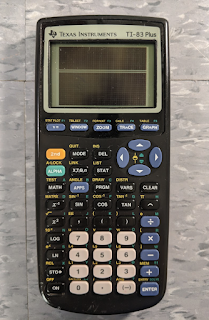 I have not reviewed or discussed graphing calculators on my site yet for a number of reasons, but I found this TI-83 Plus at Goodwill for a few bucks in very bad shape. I recorded a video of me attempting to clean and repair it, but I couldn't get it to work. I might post that video in the future since it does show a few techniques I use to clean electronics. 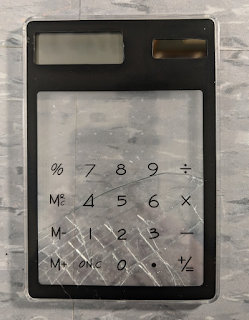 I ordered this from Canada on Ebay and it arrived broken. I won't even attempt to fix this device because I cannot fix broken glass. The number 7 works on it though. 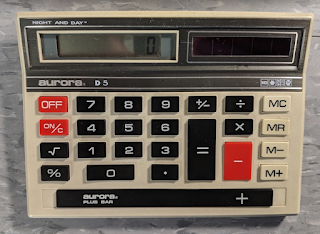 The very first calculator review I ever wrote was for the Aurora DC-10. It's not the first review I wrote for this site, but it was on Facebook first. When I found the D5 on Ebay for a few dollars, I didn't hesitate to order it. Sadly, it's very old and the keys only barely work. Of all the devices in the graveyard, I do think this one has the best chance of being fully repaired and restored. 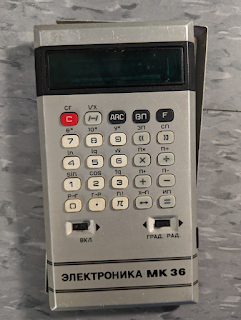 Here it is, the truly devastating loss in my collection. This calculator comes from the Ukraine, but was sold in the Soviet Union back in the late 70s or early 80s. I did manage to get it working for a moment, so that was quite glorious. I can't be too upset because clearly this calculator has been through a lot. 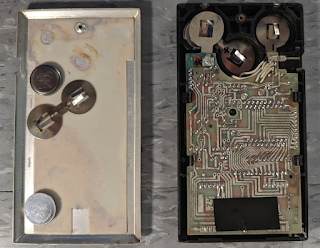 I do hope that some day it can be revived because it's a beautiful device that deserves another chance.
Posted by calaquin at 8:30 AM