Something Different: Gametrak Musical Instrument and reason for hiatus 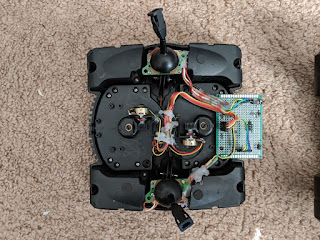 This was completely unplanned, but I'm taking some time off from writing calculator reviews again. Last week I didn't manage to finish up the reviews I was working on so only one thing was posted. This has been due to a project that was just started that I want to finish before the end of the month.

I am upgrading a musical instrument that I built last year for school. It has turned out to be a lot more work than I expected, but it's coming along nicely. It involves a lot of soldering and wiring, both of which I'm not particularly experienced. I'm trying to fit everything into a toolbox for portability while also trying to make it sturdy and reliable.

It's a very fun project, and I've had a great time working on it.


This is the Gametrak, a video game controller from Madcatz for the Playstation 2, Xbox, and PC. You wear gloves that attach to the wires and it's able to track your hands in 3D space. Only two games were released for it, and the Wii came out shortly afterward so it became obsolete pretty quickly.

Some clever musicians realized it could be used to make an instrument. The video below is just one example.

I did the same thing for a class project, but I had a lot of issues with it. The one I bought only works on the Playstation 2, so I had to tear it apart and build my own circuit board to connect it to a Raspberry Pi.

It looked like crap, but I had very little time to work on it. I really wanted to make something better, but the class had ended and I moved on to other things.

A week or so ago, I was asked to take some pictures for the professor of the class, and was informed that they wanted to use it for another class. This inspired me to return to it and design the instrument to my liking. I completely disassembled what I had and rebuilt the circuit board to plug directly into an Arduino. After dozens of other revisions, this is what I came up with:
As you can see, there's still a LOT of work to be done. I don't want to neglect my calculators, but I'm very excited about getting this thing completed. I'm trying to spend as little money as possible on it, so it's constructed mostly of things I had stored in boxes and parts from broken electronics I was going to recycle.

Anyway, I wanted to let my readers know that I'm still alive and that there will be more calculator reviews in the near future.