I was originally planning to re-review each calculator I posted on Facebook in order, but I've decided to delay graphing calculators for the time being. I'll be skipping calculator two and going straight into calculator 3. This is a good thing, because I haven't reviewed anything from Texas Instruments on this site yet.

The TI-30-II came out in 1982 and only lasted two years before being replaced by the TI-30-III. I don't know if this is because it had the same issues back then as it does today, but it wouldn't surprise me. While Texas Instruments is known to the general public for their calculators, it doesn't mean they get it right every time.

Aesthetically, the TI-30-II is brilliant. It has an outstanding color scheme that just works for a pocket scientific calculator. It uses two shades of brushed aluminum on its faceplate with buttons that blend in and nicely contrasted labels above each button. I especially love the Texas Instruments logo on a black band near the top, but it's a little strange that they wouldn't also put the calculator model name up there too. They left that at the bottom, where it's barely visible.

But the buttons. Oh my, the buttons. I love them. They are exactly the kind of clicky that I love in a calculator. If only this calculator was responsive. Every button needs to be pressed especially hard, which doesn't put this sturdy device at risk of breaking, but it completely ruins the feel of the device. Often I'll hear the click of the button only to see nothing appear on the LCD display. It's heartbreaking to see such amazing button design go to waste.

Often, when the buttons are pressed hard enough to register a response, numbers will appear twice. Without any sort of back space or error correction, it makes this calculator nearly unusable.

Sure, this calculator is nearing forty years old. We should expect old electronics to deteriorate over time. That's a horrible excuse and you should be ashamed for thinking it. I own several calculators much older than this one that still work perfectly. It's possible that mine went through some hard times and maybe it's a miracle that it works at all, but since I can't safely disassemble this device, I won't know without getting my hands on another one of the same model.

Despite its flaws, this is a calculator worth displaying proudly. I have no intention of relying on it for anything more than a conversation piece. Maybe there's value in that. You be the judge.

I found this calculator at Goodwill for $1.50. 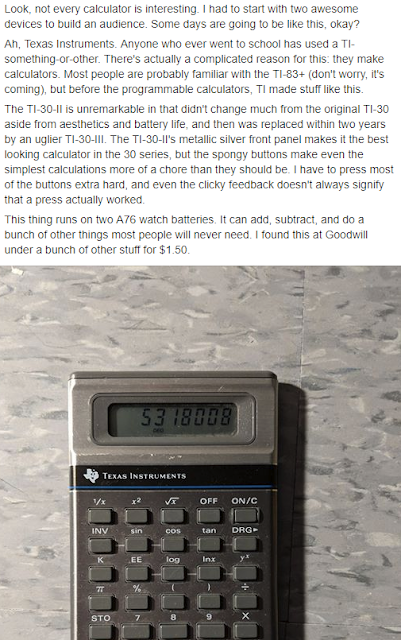