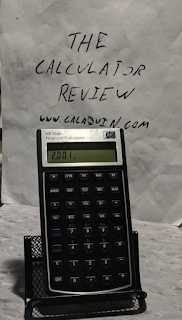 If you've been following my Twitter or YouTube channel, you may have noticed by now that I'm expanding into older technologies that aren't calculators. This is something I've been wanting to do for some time. I won't be posting non-calculator material on this blog, but maybe I'll create something separate for posts about the other things.

My first real interest in calculators was piqued in early 2016, during my first semester of the Computer Science program I'm still working on. Since calculators are the precursor to the personal computer, my professor at the time discussed them in great detail, especially the Hewlett Packard brand. I remember being fascinated by these, and have acquired a few to play around with myself, they definitely live up to the hype.

The Hewlett Packard 10bII Financial Calculator doesn't use Polish notation like some other HP-branded devices, but it's still really cool. This isn't a particularly old or vintage device, having been introduced in 2001. It's the second in the 10b line, and has since been replaced by the 10bII+ in 2011. Despite it being new, it retains a beautiful vintage aesthetic with its use of dark brown and a sort of muted orange. HP even gave its display a sleek brushed aluminum frame. The plate for the buttons may also be aluminum, but it's a shiny black with a thin aluminum border.

Oh, the display. It's fantastic. Sure, it's LED, but they absolutely nailed the contrast. The digits that appear on the screen pop out boldly and appear from left to right instead of the usual right to left. Since this is a financial calculator, commas are automatically applied where they should be, giving this device a feeling that it's more luxurious than your average calculator. This is the kind of calculator that will guarantee looks from passersby as you walk with it.

The 10bII also feels as good as it looks. It fits nicely in the palm of my hand allowing for simple one-handed operations. There is absolutely no give when any two points are pressed so I can feel comfortable leaving this in my pocket all day, especially with its provided leather case.

I need an entire paragraph for the button feel alone. Readers of my reviews should know by now how much I love clicky buttons. It's like this device was designed specifically for me. There is an audible click with every button press and it is so satisfying. Every single operation feels great, and this is on top of the great results looking great on the great display great.

I'm not ashamed to admit that I'm a huge fan of Hewlett Packard calculators. I've never used one that I didn't like. This device runs on two CR 2032 batteries that are easily accessed via a panel that can be opened with a fingernail. HP knew this was going to be a go-to financial calculator and ensured its reliability by doing this.

This calculator was found at Goodwill in a glass display case. I paid $7.99 for it.