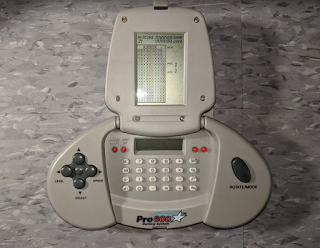 Monday's calculator review was about a gimmicky device, and I believe I've made my stance on gimmicky calculators quite clear by this point. Normally I only do one of these at most per week, but for some reason I decided to review two of these sorts of calculators this week.

The Pro 600 Gaming System (TM) is in fact two devices in one block of plastic. They each have their own set of keys and batteries, and honestly I don't understand the point of this thing. It's a calculator and a handheld gaming console, yet it sucks at being either of those.

The calculator portion is entirely unremarkable. Buttons are squishy but responsive enough. The most unique thing about this calculator is that it has an off button. That's nice for battery life, since this calculator only runs on battery, but there just isn't a whole lot else to say about it.

So primarily this is a gaming device. It alleges 600 games, but there is absolutely no way I'm going to try them all out. The buttons that control the games are horribly unresponsive and squishy. Yet that's not even the worst part about it. All of the graphics are these little identical squares that do not do an okay job at showing what things are supposed to be. It's often difficult to tell which game I'm playing, let alone which block or set of blocks are mine to control.

To call them "graphics" is incredibly generous of me. I've played some of the very first video game consoles ever created and those graphics look lifelike compared to this garbage.

Still, the worst part of this device is the sound. It's obnoxious and loud and awful and I hate it. It plays songs whenever the batteries are inserted, when the on button is pressed, when a "game" is loaded, and it all sounds terrible.

Despite all of this, I do kind of like the overall design of the device. The colors do a fine job, and it's contoured well enough for hands to hold comfortably. The clam shell layout is surprisingly sturdy so there's little risk of this thing breaking easily. It looks and feels pretty solid.

I don't recommend the Pro 600 Gaming System for anyone. There are countless other devices that are much cheaper than the $14 I paid for this on Ebay. It runs on two AA batteries for the gaming portion and a single AG10 battery for the calculator. Either part can run without the batteries installed for the other.