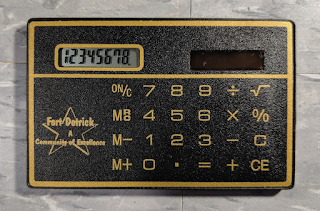 After this week, I only have one more review I can copy from Facebook to this blog. We're almost in unknown territory here! This review was slightly edited.

I honestly thought [last week's] abacus review would have been controversial due to it not being an electronic device. It turned out to be one of my most liked reviews though [on Facebook]! I do have some other devices that aren't technically calculators, so I may add them to the stack.

What is most definitely a calculator is this thing. As far as I can tell, it's actually a Nestler-matho 700, but there are enough subtle differences to lead me to believe it's not. I've included an image of one of those for you to make comparisons.

This is currently the smallest calculator that I own, only the size of a credit card (and barely thicker than one too), and considering its size, it has decent functionality. The inclusion of square root is impressive. Each button works just fine*, and the digital display is crisp- most of the time.

This calculator runs entirely on light. The moment it doesn't have a bright source, the screen fades out. It's kind of neat to watch, so I've included a gif of this happening. It came with a plastic sleeve that actually reduces the light source enough to make the device extremely unreliable when it's in there, so I don't know why they bothered to make it clear.

Its size is really the only thing that makes this calculator special. The Ft. Detrick logo is kind of ugly and tacky, and I could probably break the thing if I sat on it. But as long as it's got a decent light source, it works fine. This calculator was found at Goodwill in a bag with other calculators for $1.50.

* actually, the buttons are terrible. They have no tactile feedback whatsoever and it's very easy to press the wrong button.