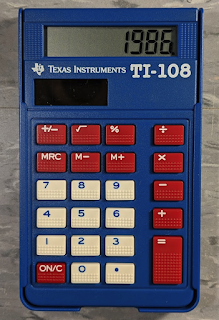 I like to begin each calculator review with a brief paragraph about something other than calculators, then segue seamlessly into the review. It gives each review its own sort of personality and keeps things fresh.

If you've never seen or heard of the TI-108, it means you haven't been inside a school since 1986. These things are everywhere. You can buy them in packs of 10 for like $30 on Ebay. But just because something is common and used by everyone doesn't mean it's necessarily good.

Yet the 108 is one of the best calculators ever created. Sure, it lacks any unique features, and can only perform basic operations, but just look at it. Seriously, find the nearest kid and take their backpack and dig through it until you find one. You most likely won't find a scratch on it, and it's definitely going to work. Texas Instruments made an extremely durable calculator that even a child would struggle to ruin.

The buttons are colorful and coordinated, have a great tactile feel, and everything is right where it should be. Not that it's needed, but they included a solid cover for added protection. It's impossible to tell how old a given TI-108 is because these things don't age. The solar cell works perfectly every time, so there's no need for a battery.

I really tried to find something to dislike about this calculator, and maybe nostalgia plays a role, but the TI-108 is simply perfection. These have been widely available since 1986 and will probably be used in elementary schools for at least the next thousand years. I got mine on Ebay for $4.

* * * UPDATE * * *
The above was the initial Facebook review, but I have since learned that the TI-108 has at least two variations, both of which are discussed in the video review. The older version runs on pure solar energy while the newer is dual-powered. They also have slightly different external colors. Internally, they look like completely different devices.
Regardless of the variation you get, you won't be disappointed with the TI-108.