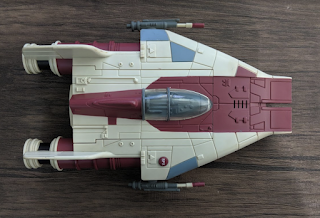 The first Star Wars film I ever saw was Episode VI: Return of the Jedi. Even without the context of the first two films, I found myself captivated by the idea of a civilization far away that viewed space travel as completely mundane in the way that we see cars and airplanes. I was also young so I thought the Ewoks were great and C-3PO was an acceptable form of comic relief. I still love these things.
So here is my Tiger A-Wing, which is also a calculator. Honestly, I don't know why it's a calculator. The calculator part is completely unremarkable but it's the sole reason I'm even discussing this toy here on my website. I don't even really want to talk about the calculator because I've got nothing interesting to say about it. It works, sort of. There's a problem with the display. I don't care.

Tiger is mostly known for its line of simple electronic games, so it's odd that they would bother turning a ship into a calculator. They also made a Millennium Falcon-shaped electronic game that I've never touched. Maybe they didn't think the A-Wing was cool enough to get its own game.

Like most Star Wars toys, it's not expertly detailed or anything. It looks fine, which is good enough for me. It can make a few sounds too and they of course don't sound great. The guns on the side rotate.

I might sound like I don't particularly care for this calculator, but I really do. I'm just trying not to let my love for Star Wars affect the review too much. I like this calculator a lot, but mostly because I just like spaceships.