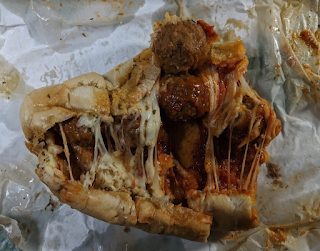 I'd like to begin by stating again that I am open to suggestions for calculators to review. For today's review, a friend recommended I review this device. It seemed like an unusual request, but I figured I'd give it a try.

I purchased the Subway 12" Ultimate Meatball Marinara Calculator at my local Subway for a little over $8, having never realized they sold calculators. It comes wrapped in several papers and even has a bag designed specifically for the shape of the device. I was surprised at how squishy it felt, but I took it home eager to try it out.

Upon getting home to record the video review and my initial reactions, I was bewildered by what I found inside. This calculator appeared to be broken as fluids were dripping from the device and soaking into the wrapping paper. I watched some videos to see how this was operated and surprised to discover that operations are performed by ingesting the calculator. The videos didn't explain how this worked, so I looked for a manual. The closest thing I could find in the packaging were a bunch of napkins with the Subway logo on them. None of this was particularly helpful.
Aesthetically, it's too bizarre to call ugly. The exterior is all brown but the interior is where all of the interesting colors are. I couldn't figure out a clean way to operate the calculator with it open, but inside was a pleasant shade of red and white that gave a nice contrast to the outside.

My best guess for how to operate it was to think of two numbers and an operator and ingest a portion of the calculator. This proved to be one of the most unique and pleasant ways to get answers to math problems. Unfortunately, I found the device to be wildly inaccurate. The first operation I attempted to perform was 2018 times 12 (the year the device was released multiplied by the advertised length). The answer I got was 36, which I'm fairly certain is not correct.

Simpler mathematical operations proved to be more reliable, however. 2+2, 18-9, and other basic problems were easily solved with each bite. But this lead to another realization: the calculator has a limited number of uses. After several calculations, I found that most of the calculator had been ingested and could not be used again. This was especially upsetting, knowing that I wouldn't be able to keep this in my collection for long.

If you're looking for a device that needs to solve more advanced math problems, the Subway 12" Ultimate Meatball Marinara Calculator probably isn't the best device. It was very expensive for such a basic device, but I enjoyed using it while it lasted. This is easily one of the most unique calculators I've experienced. It's just a shame that I'm left with nothing to add to my calculator collection.