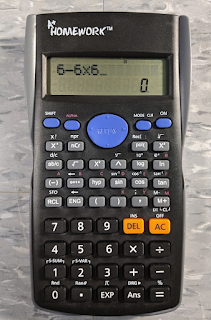 Today's review is more of an investigation than a review, but I'm still calling it a review. From the moment I first laid eyes on the A+ Homework Scientific 240 Function Calculator, something didn't sit quite right with me. The instincts I've developed since starting this review series triggered something in my brain: I don't know anything about the A+ Homework company, but I knew there was no way this calculator was designed or manufactured by them.

My first thought was to get the package open and look for any clues to support my hypothesis. Inside, I found a manual that didn't mention anything about A+ Homework or Uchi, or any other thing on the exterior packaging. So far, I was feeling good that I was correct in my assumption.

I did play around with the calculator a little bit before taking it apart. What I found was that the device is fairly sturdy, and the buttons and LCD display work just fine. For $4, it's not bad. There's no false advertising since there's no solar panel, and it seems like the 240 would be great for a math student. That's pretty much it for the review because there's not a whole lot to say.

Anyway, I removed the six screws on the back and exposed the interior. Inside I found cheap Chinese components held in place with masking tape. It's not as bad as I make it sound, but I was more interested in finding clues to who actually made this calculator. There weren't any logos or company names to be found, and if I wanted to dig further, I'd have to break the plastic tabs holding the keypad in place and risk everything falling apart. I didn't think it was worth the risk because it was unlikely I'd find any additional information this way.

So far, no conclusive proof was to be found, so I took to the Internet to find answers. First I did a Google search of the calculator and found that it could be purchased wholesale from a number of sites. Then I went to the A+ Homework official website, APlusHomework.net. There I found that they sold a variety of school supplies including calculators. But this device didn't appear in the calculator section.

Scrolling further down the main products page, I found a link to discontinued products. Page after page showed nothing resembling the 240. This was suspicious to say the least. Why pretend it never existed in the first place? What were they trying to hide about this calculator?

Then I remembered the manual. While it didn't have any logos, I remembered a strange series of letters and numbers printed at the top: 82MS and 350MS. What did it mean? I suspected at first maybe these were response times for the processor, but why would that be the first thing the manual discussed? Also, those don't seem like times worth bragging about.

For hours I pondered the meaning, plugging the numbers into the calculator in a number of ways to see if maybe there was something hidden within the software. I even read a few paragraphs of the manual to see if there were more clues, but that got boring so I continued adding, subtracting, multiplying, diving, and square rooting numbers to see if I could find some hidden message.

I knew I was reaching a dead end, but I didn't know where else to turn. I tossed and turned all night in bed between dreams of A+ Homework tracking me down and stopping me before I could expose them. The people of the world would be left forever clueless, and continuing to buy cheap, unreliable calculators. Then, in a cold sweat, I sat up violently, throwing the sheets off my chest.
How could I have been so foolish? The realization hit me like an egg splattering against a brick wall.

I raced back to my computer, briefly thankful to see the calculator still sitting on my desk where I had left it. A+ Homework hadn't infiltrated my home yet, so I knew there was still time. I might have worried they could have snuck in at night and swapped the device out for something else, but the manual was still there, still showing those until now enigmatic numbers and letters.

82MS. 350MS. How did I miss it? It was staring me in the face the whole time. In all my attempts to solve the problem with math, I had forgotten to use Google.

So it turns out 82MS and 350MS are the model numbers of Casio calculators that are identical to this one. This 240 is just a knockoff.