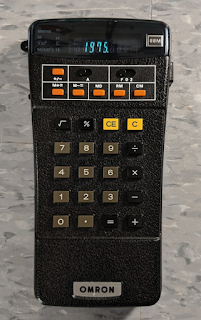 I wish I could own every calculator ever. I'd love to be able to review all of them and maybe make the world a better place. But sadly that is probably an impossible task because my home is small and I'm not rich. I have to be selective when calculator shopping now, so that means purchasing devices that stand out in some way. I've got plenty of boring calculators in my collection already.

The Omron 88M came from Japan way back in 1975. It runs on two AA batteries to power its green LED display. It has fairly basic functionality, with a floating point switch that allows the user to quickly and easily switch to financial calculations or avoid decimals completely.

I would never have guessed that this device was released in 1975. If I had to guess, I would have assumed early to mid 1980s, but that's when the LCD display became popular. This device looks and feels like something from an alternate timeline because I've never seen anything quite like it.

The peculiar design makes it fit comfortably in the palm of a hand and reminds me of those scanning devices from Star Trek. I wouldn't be surprised if the design of the 88M was inspired by the original series. By placing the batteries at the bottom, this device is perfectly weighted and clearly designed to be carried around.

The rough black faceplate was an odd but not unwelcome choice. It makes the calculator look and feel rugged, like something designed to be taken on an adventure. That may explain the keychain attachment, if that's what that is.

Each button sticks out prominently and is easy to press, with instantaneous response on the display. This is an easy device to use one-handed, and fits nicely in a pocket thanks to the strange profile.

Functionally, the 88M is nothing special. It works great, but I could say that about many other devices. It's the strange design that made me want this calculator. I found it on Ebay for about $9.