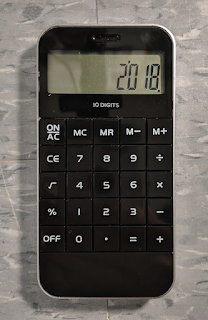 The slogan for my YouTube channel is "I review calculators so you don't have to." I thought it was funny, but now I realize its importance. I don't want people to buy bad calculators, so I put myself at the front lines and sacrifice my time and money to get the word out about what's worth getting. It's impossible for me to warn against every bad calculator out there, but I hope that with enough reviews, people can search for a device that suits their needs.

This 10 Digits Phone-Shaped Calculator (PSC) has an interesting gimmick: it's trying to look vaguely like a cell phone. I don't know why anyone would want this, but I was intrigued enough to purchase one on Ebay for $4. Of course I wasn't expecting to get the best device ever. I just liked the gimmick.

The PSC looks very sleek, and has a great black and silver color scheme. The buttons are all flat, but separated just enough to prevent accidental pushes. They aren't clicky, and that's okay.

The LED display is quite large for such a small device, and does indeed fit 10 digits. There's plenty of contrast to make things easy to see.

So far, the PSC seems like a pretty solid calculator. I thought I was going to be writing a fairly positive review when I was expecting something terrible.

And there is something terrible. See, I disassemble every calculator for reviews, if possible. This device only had two visible screws, so I figured getting some internal photos and checking out the battery situation would be a trivial task. To a point, it was. The screws came out easily, and I began to pry the device apart until I hit a snag. The top portion felt very tight, so I used a piece of plastic to wedge it apart. Finally, it came apart...

It turns out this device was never meant to be disassembled, which is baffling considering it runs entirely on battery power. This is a huge red flag. Getting to the battery requires removing eight screws and breaking plastic, as well as separating every single component.

That puts the PSC into my least favorite category of calculators: disposable. I shudder every time I think of this concept because it shouldn't be a thing. There is no reason anyone should buy a calculator and not be able to use it indefinitely.

For that, I simply cannot recommend this device to anyone. It could have been a cute thing to have, but I'm just disgusted by it.