To post more often, I'm switching to Tuesdays and Thursdays so that I only have to do two a week. This should make this website more manageable and give me more time to post interesting stuff.

Last week I received an old Apple computer that I knew absolutely nothing about. I have very little experience with Apple products, but I've always liked the way their older computers looked. So when my brother-in-law offered me a free Power Mac G4, I happily accepted it not knowing whether it would work or not. 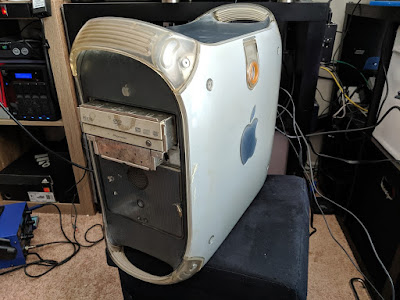 This thing is filthy. Before I did anything, I wanted to see if it even powered on. After searching through my bin of cables, I found a power cord and monitor cable. 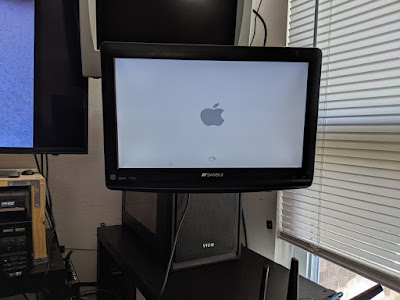 The power on sound from the computer tower itself is so cool. But more importantly, something was displayed. After a few minutes, the screen went blank so I wondered if something might be wrong with the hard drive.

There's a big latch on the top that opens the entire computer. 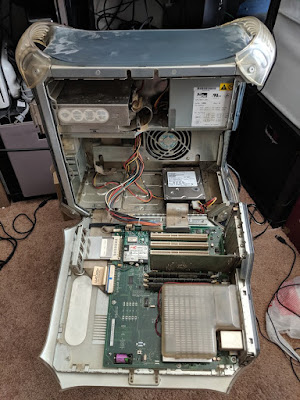 I love the way this opens up. I'm so used to working with Windows PCs and struggling to get to internal components, but the Power Mac G4 makes it so easy.

This picture is a bit of a lie because I took it after removing the old hard drives and installing a fresh new one I found for $17. Old Apple computers use IDE hard drives instead of SATA, and sadly I didn't have any of those lying around.

With the new hard drive installed, I booted up the machine again to discover that nothing happened. Of course, I needed an operating system. But I didn't know what OS this computer used or where to get it.

I'll skip the details, but after trying several things, I finally discovered something that worked.

I had to download PowerISO because nothing else would let me burn the image using a Windows 10 computer. When I had this figured out, I turned on the Power Mac G4 and inserted the disc into the disgusting DVD drive. 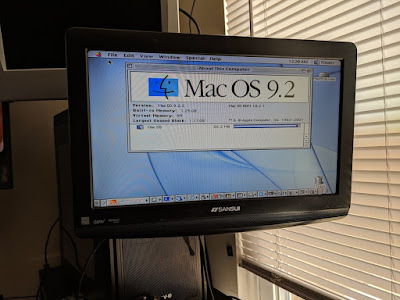 The files on the disk explain how to format a hard drive and install OS 9.2. It's pretty easy to do, and after it was done I snapped a picture.

I have no idea how to use this operating system, so I wasn't able to get into the Internet with it. I tried a wireless connection to my home network and then Ethernet, but nothing gave me any results. I don't even know how to find or install any interesting software on this yet. 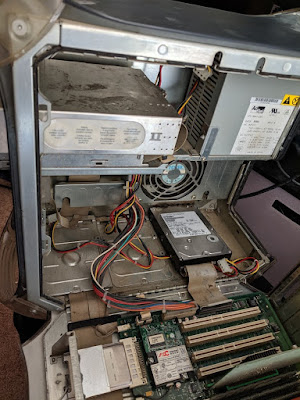 Mostly I'm looking forward to giving this computer a deep cleaning. It's really gross inside. 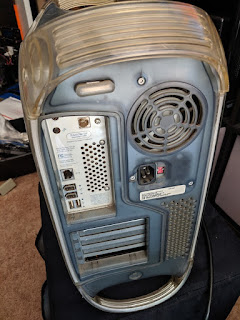 It's also missing some cosmetic parts, so I'd like to replace those and get the computer looking brand new again.

For now, I'm just happy I got it working considering I know so little about it. Eventually I'd like to install some late 90s/early 00s games and software and get the official mouse and keyboard to complete the look.

This is a very cool looking computer and I'm looking forward to making it look great again.
Posted by calaquin at 8:30 AM