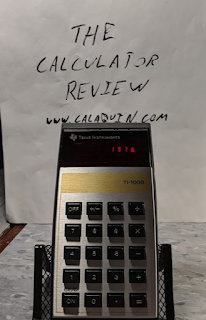 So begins another week of calculator reviews. Giving myself more time for each review has allowed me to improve the videos and the posts, as well as create additional content such as Obsolete Technology and The Calculator Repair. The response I've received for these has been just as positive as the calculator reviews.

Since it's Monday, I also get to pick the Comment of the Week, so here it is:

I didn't get any comments last week...

Last week I reviewed the APF Mark 65 and mentioned that there were other calculators with a similar aesthetic that were far superior. The one I had in mind was this Texas Instruments 1000 calculator. Personally, I prefer this color scheme as it's more consistent and elegant, but the TI-1000 beats the Mark 65 in several other categories.

I'd like to address the bizarre numbering system Texas Instruments uses for their devices. I don't get it. The TI-1000 is the third generation, starting with the TI-2500 and then the TI-1200. I have no idea why they went backward with the numbers, or why even later models used only two digits. Nothing about it makes any sense.

The TI-1000 doesn't try to impress anyone, but it succeeds in doing so. It features a gorgeous red fluorescent display behind a crisp brushed aluminum face plate. It's a little heavier than it looks, and the device feels very sturdy when held. The functionality is about as basic as you can get with a calculator and yet that somehow makes it even better. The operations work, and that should be all that matters.

Well, they mostly work. I've actually purchased two TI-1000s and both of them have had issues. The first one I bought had a messed up display, so I attempted to fix it and found that the ribbon inside was slightly torn. This seemed like an easy fix, but the ribbon was so brittle that my attempt to fix it made it much, much worse. I ended up rendering the device completely useless and disposed of the internals. Later, I bought a second one and this one's display works perfectly. However, it has an annoying habit of inputting a digit twice when a button is pressed once. There may be a way to fix this, but I'd have to get under the buttons and this would mean manipulating the ribbon again, and I just don't trust myself to not screw it up again.

So the TI-1000 does have problems, and for that I can't bring myself to recommend this as more than a display calculator. It looks (and feels) amazing, and it's clear that Texas Instruments put a lot of love into it. But sadly, time has been a brutal enemy to this calculator. The internals have become so frail that it's risky to even take the device apart.

This calculator runs on a single 9 volt battery hidden by a panel that feels just as sturdy as the rest of the device. I found the first one at Goodwill for about $3, then ordered the currently working one on Ebay for $8.