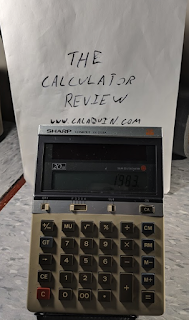 It's Friday again already so that means another Facebook review. I've still got quite a few of these so this tradition will last a while. Unlike the previous remakes of Facebook reviews, this one had enough thought put into it to simply be copied to this site. The first few Facebook reviews had very little content, but later ones were much better.

So I'm proud to say I put minimal effort into this Facebook Friday Calculator Review.

Every morning* since I've started on this quest to review all of my calculators, I get out of bed, open the blinds for my pet to look outside, pour myself an iced coffee, and then return to the bedroom to select a calculator from the shelf. I look forward to this, even when I don't particularly care for the calculator of the day. But today is special. Today, I share with you the...

Sharp Compet VX-2126A. This thing has a MASSIVE 12-digit LCD screen, capable of handling any number between 0 and one less than a trillion with ease. Worried you need to work with numbers bigger than that? Well stop worrying, because this beast also lets you use exponents.

The Compet VX-2126A is solidly constructed with a combination of metal and plastic. Even a firm grip on any two points (including the screen) doesn't feel like it's going to hurt this thing. It features a hinged stand to increase the viewing angle on a desk that would also take a lot of pressure to break off. As far as I can tell, this was constructed in Japan ca 1983.

But none of that is what makes this calculator special. I told that story at the beginning because, since I've owned this calculator, every morning I see this beast chugging along. You see, this calculator *never* turns off as long as it has even the tiniest amount of light. This is by far the most reliable calculator I have ever owned.

The Compet VX-2126A uses no batteries. It's beautiful, sturdy, and has more functionality than I would expect from a purely solar calculator. I found it at Goodwill for like $1.99.
* I no longer write these the morning they are posted, so this routine no longer applies to my calculator reviews. I considered removing this no-longer-true statement, but it would affect the flow and themes of the review negatively. It would require considerably more effort to restructure the review than to explain myself here. Thank you for your understanding.