What came with the Commodore SX-64

Getting the Commodore SX-64 was exciting enough, but the seller included a box of software and accessories. I was mainly focused on ensuring that all of the components of the SX-64 were in good working order, but eventually I got around to taking a look at the box.
It's a crazy amount of stuff, so I still haven't gone through all of it. But I'll discuss some of the highlights. 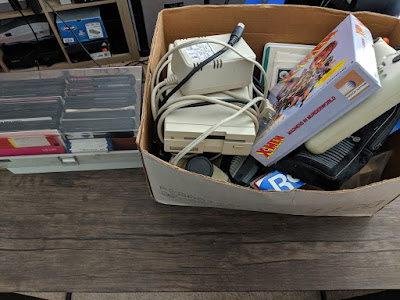 I found a floppy disk container at a Habitat for Humanity ReStore for $2 so all of the disks went into that. 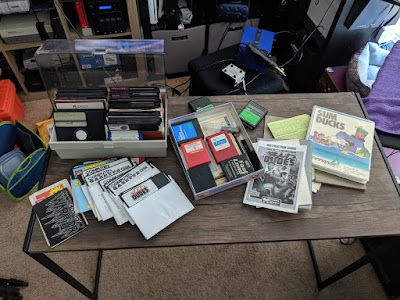 Not all of the software could fit in the container, and not all of it was floppy disks. The computer also came with several cartridges. About half of the disks are games and software and the other half are what appear to be personal documents. 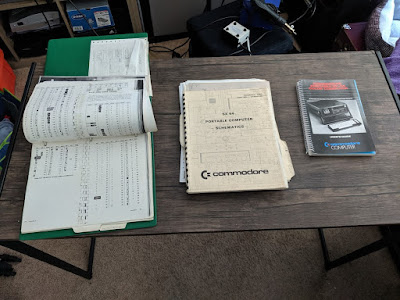 This was the biggest surprise in the box: documentation. Not only did the computer and other hardware come with original manuals, but also hundreds of pages written by the user detailing machine code and programs written for the computer. This stuff is way beyond my understanding as I've focused primarily on cleaning and repairing Commodore computers. 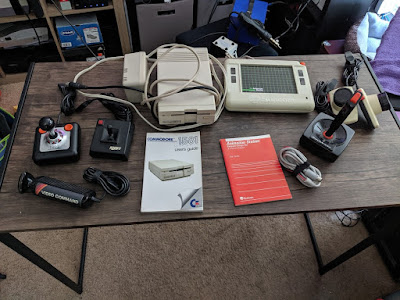 At the upper right is the Suncom Animation Station. It's some sort of tablet with a stylus and buttons on the side. I assume you can draw things with it.

And the rest are controllers, including the paddle controllers for Pong! I've got several other vintage video game controllers that I'd like to cover in the future.
Posted by calaquin at 8:30 AM