The summer heat wave has been horrible but that doesn't mean I can't take advantage of it. The sun puts out at least 20% more UV than my two 15 watt black lights, so I might as well save a bit of electricity and use nature for what it's intended.

It didn't start out this way though. I tried using the black lights to restore the keyboard keys. Here are the results of that attempt. 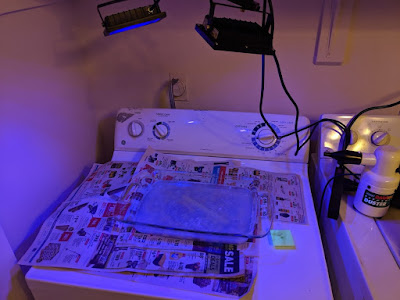 Every key was scrubbed with soap and water and then submerged in a solution of 40 volume creme and water. I used the exact same method as I did with Project 64's keyboard, so if you care, you can see how I did that by checking out this link. 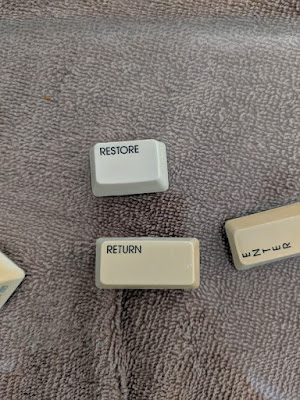 The results weren't impressive. Many of the keys were already in great condition, so I was able to use them as a basis of comparison. The keys that were yellowed didn't change at all after 24 hours under the black light. 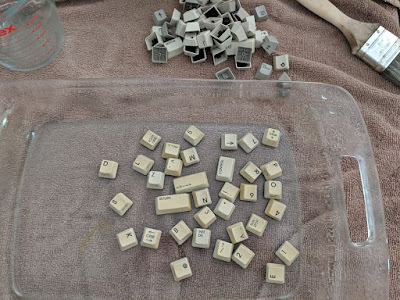 I set aside the good keys and poured a thick layer of 40 volume creme over the yellow ones. 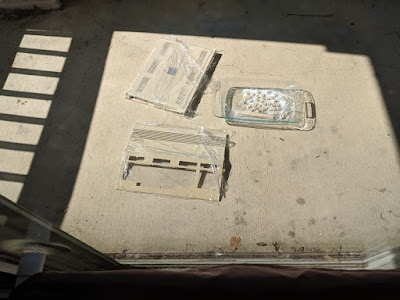 I figured I might as well coat the chassis with creme too. This time I used the power of the sun to drench these parts in ultra violet photons. Unfortunately, due to the rotation of Earth and the position of my porch, I only get a few hours of sunlight to use. I had to move everything several times throughout the day to maximize the amount of time each part was exposed. 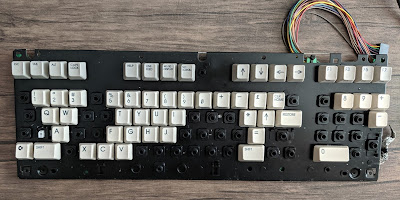 While waiting for that, I figured I'd get the keyboard reassembled. I scrubbed all of its components with soap and water and reinstalled the keys that were already a good color. I also coated the parts with some Armor All to help protect it from additional damage. 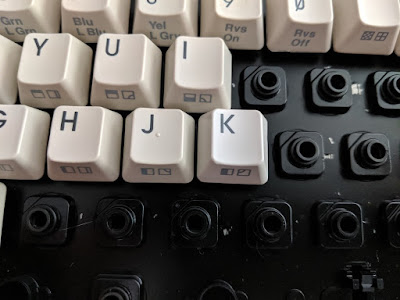 The J was the "good" key and the K went through the sun retr0brighting. Now the previously very yellow keys look better than the already white ones. This is annoying. But clearly the sun was much, much better at bleaching these keys than my black lights. 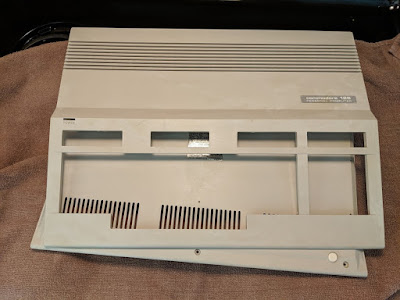 The chassis revealed its own problem: now it's all stripey. I probably should have spent more time coating these parts with the creme. I'd like to try another method to get this looking nice and uniform. 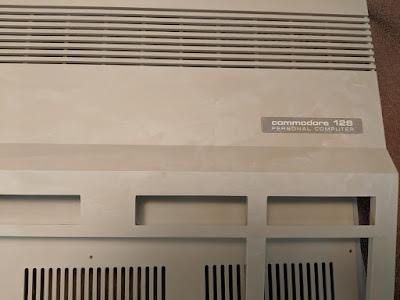 Here's a closer look at it. It's bad, but not a disaster.

Already this Commodore 128 is looking a lot better now than it did when I got it. There's still work to be done on the messy interior and the other half of the keys will need sunlight treatment. Also, as I was reassembling the keyboard, I found that several keys fall out easily. They will need new parts to stay in place.

I was hoping to get this computer restored with only two posts, but it's a bigger project than I had anticipated.
Posted by calaquin at 8:30 AM