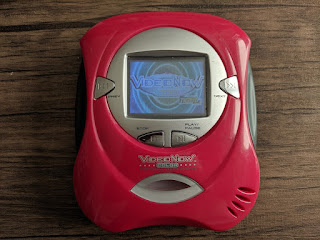 It's easy to forget that there was a time when people didn't carry an infinite source of information and entertainment in their pocket wherever they went. Today, portable Internet devices allow us to view pretty much anything we'd like to see while on the go. Back then, if you wanted to watch a movie or show, your options were waiting for it to play on network television or having a DVD or VHS of said media. In both cases you had to be stationary to watch them.
Tiger apparently wanted to solve that problem with their Video Now devices. These were a lot like portable CD players, but they could only play their proprietary PVDs (Personal Video Discs). These PVDs are slightly smaller than CDs, probably to prevent people from pirating movies and shows on these devices. But why would anyone bother to do that?

The first generation of Video Now had a black and white screen with no back lighting. I can't speak for the video quality of that, but given how bad it is on the Video Now Color device that I own, it had to be awful. It has a tiny 2.5 inch screen that still manages to put out video quality worse than your average CRT television running an old VHS that hasn't been cleaned in over a decade. 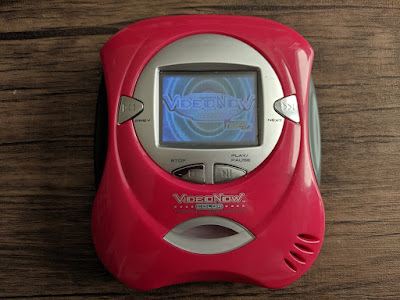 The video quality sucks, is what I'm trying to say. PVDs are only capable of 15 frames per second, so any time there's a lot of movement in the video, it's very noticeable. Colors are washed out and it all just looks ugly. 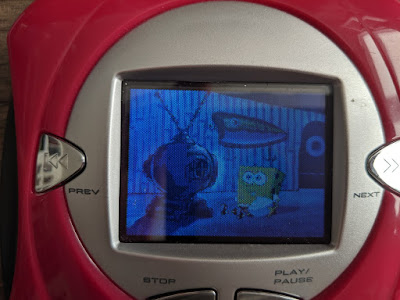 The audio isn't much better, being only mono and coming from a very crappy speaker, but it's not so bad that you can't understand what people are saying. It's only barely passable. The maximum volume was plenty loud for me to hear just fine in a quiet room. 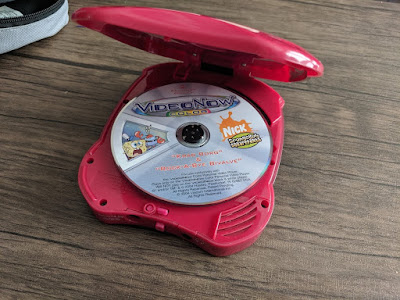 To make this device that much worse, each PVD is only capable of holding 30 minutes of video. This means you get one episode of a TV show on each disk. To bring the entire first season of Avatar: The Last Airbender with you on the go, you would need to carry 20 discs. 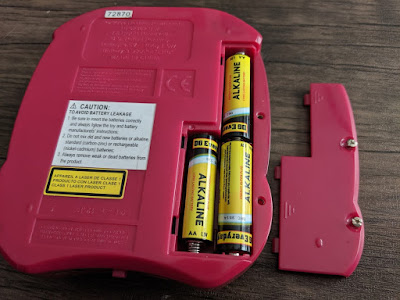 Portable DVD players already existed before Tiger released the Video Now, and while they were never fantastic, they were a lot better than this thing. The Video Now Color was $75 at the time of its release, which wasn't much less than a generic portable DVD player. A single DVD could hold an entire movie or several episodes of a show, and there were a lot more to choose from.
I found this thing with a bunch of discs and its carrying case at Goodwill for $9.99. Having watched a few episodes of Spongebob Squarepants on it, I can safely say that this is one of the worst ways to watch anything.

As terrible as it is, I have to say I like it a lot. It's an interesting idea, and I'm a sucker for video formats that no one uses anymore. I still have a decent collection of VHS tapes and Laser Discs, as well as a few Betamax tapes (though no player... yet). If we never had portable Internet, perhaps formats like these would still be in use today.
Posted by calaquin at 8:30 AM