Modding a Commodore Amiga 500 to Run Games on USB 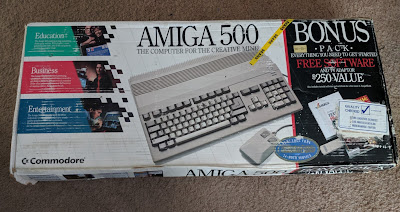 Not long ago, I got a great deal on a Commodore Amiga 500 complete in box. I already had an Amiga 500, but it's a PAL version and was missing some important components like the power supply, video adapter, mouse, and any software. But now I had an NTSC machine with everything I needed to play games. Or rather, one game. 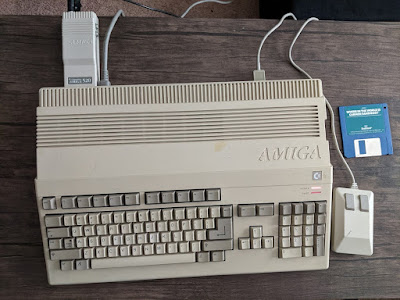 The only game it came with was Where in the World is Carmen Sandiego? You could argue that no one needs any other games, but that would be a dumb argument because the Carmen Sandiego games weren't that amazing. 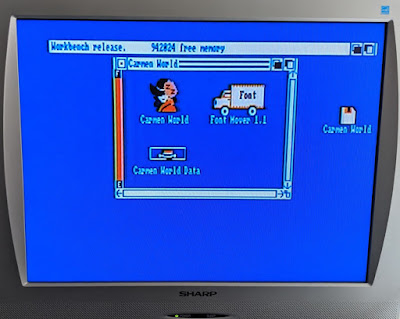 Without issue, the Amiga 500 loaded the disk just fine, and within a few minutes, I was in the game. 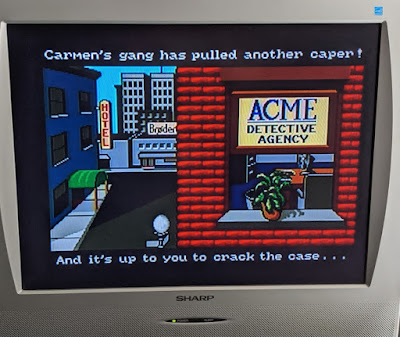 Neat. Having a working computer is a good step toward playing games on said computer. I've never used an Amiga 500 before, but everything looks good here. However, I needed more games. 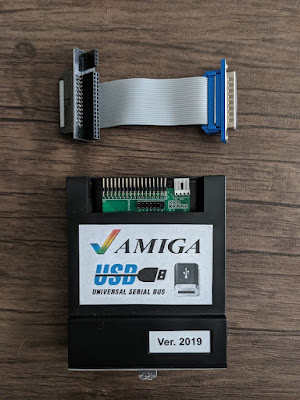 That's where this neat device comes in, the Commodore Cortex Emulator (Ebay link here). It's a floppy disk emulator for the Amiga that uses a USB drive instead of the obsolete floppy disks. I would have been happy copying files to empty floppy disks, but there currently isn't a solution for doing that with Windows 10. At least, not one that I know of. So the next best thing was to emulate the hardware. 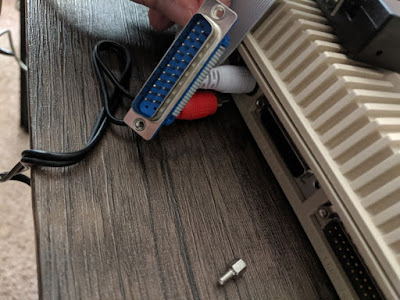 Annoyingly, the male connector port of the cable I bought is too big to fit on the female port. I don't know why I was given this size since it doesn't even use all of the pins. To fit it on the Amiga, I had to remove one of the mount screws and then it fit just fine. Maybe other Amiga models use this larger connector. I have no idea. 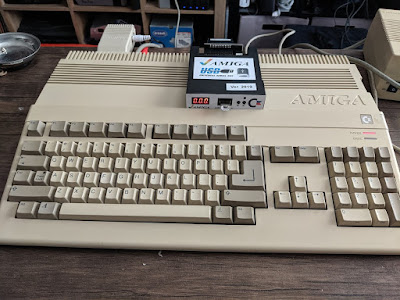 With everything plugged in and connected, it was time to see if the emulator was working. 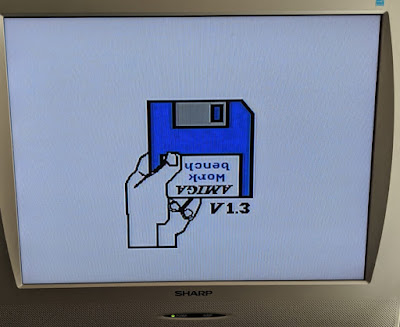 While I don't know much about the Amiga 500, I know that this screen means it's not detecting a disk. For some reason, the computer wasn't recognizing the emulator. Argh! I searched through the instructions of the emulator and tried all of the troubleshooting things it suggested. Still nothing.

So I contacted people in the Commodore community to see if they had any insight. Of course they did, because the Commodore community is insanely cool. It turns out that the Amiga 500 can't detect an external drive with its internal drive also working. At least, not an emulator drive. I needed a physical switch to tell the computer to look at the external device as the primary device. 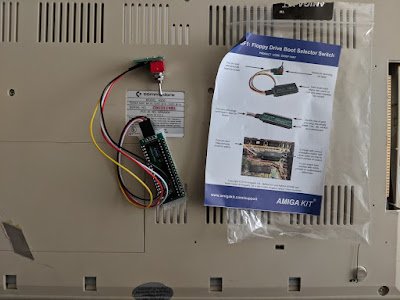 So I got one. Here's the Ebay link. To use it, I needed to get inside this computer. 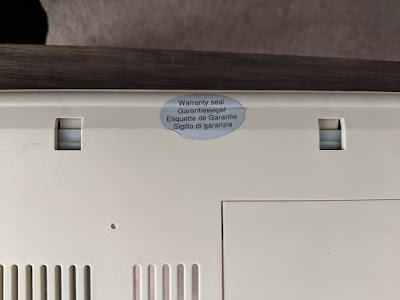 Flipping the A500 over, I discovered a warranty seal that hadn't been broken. I was going to be the first human being to ever see the inside of this computer! 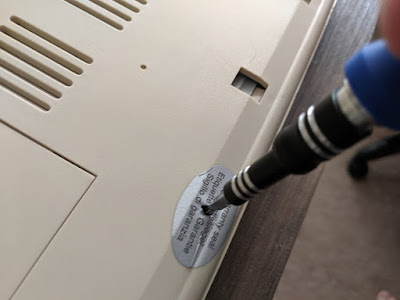 I know it seems wrong to break an almost 30 year-old seal, but it's for the greater good. I'd have to break it eventually anyway because this computer needs a good cleaning, which I won't be getting to with this post. 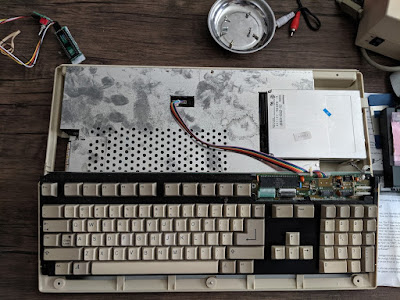 With all of the screws unscrewed, I removed the cover revealing the inside. The keyboard slides out easily, and there is a cable harness and grounding strap that easily disconnect. With that out, I needed to remove the RF shield. 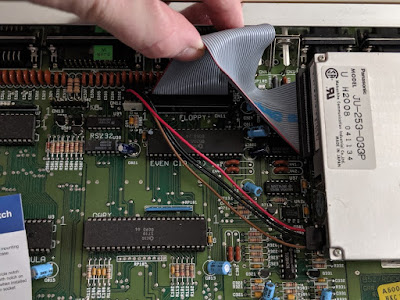 Here's the chip that needs to be removed temporarily to install the switch. Thankfully it's not soldered in place, so it came out easily. 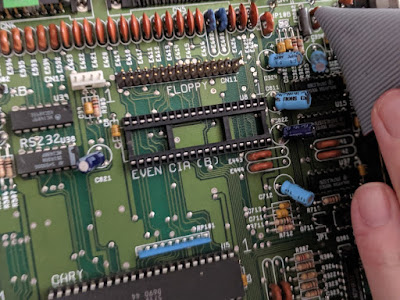 I also had to disconnect the floppy drive cables to have clear access to the chip socket. 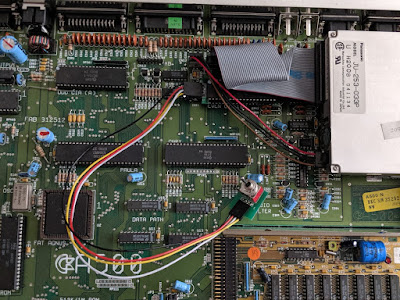 And here it is installed. I plugged everything in to do a smoke test (smoke is bad, so if there is no smoke that is good) and saw no smoke. Hooray! 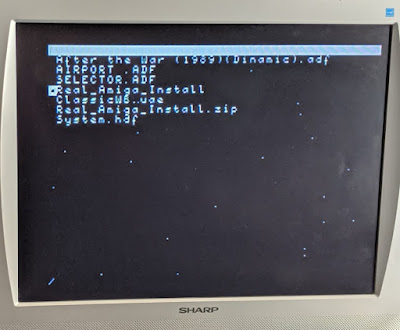 I had already put some stuff on the USB drive, and I can't remember what was on it originally. But this screen meant I was doing something right. This is the menu that lets you select which disk to load by cycling through the numbers on the emulator. It's not exactly intuitive to use, but once I got the hang of it, it wasn't much of a pain. 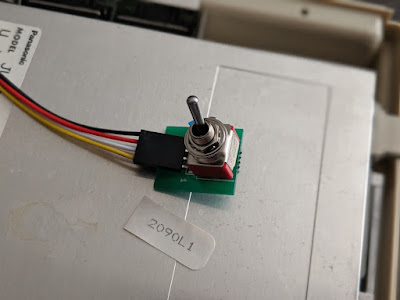 With everything apparently working, I needed to figure out where to put the switch. There are no pre-drilled holes for it on the computer anywhere, so I was going to have to make a permanent change. 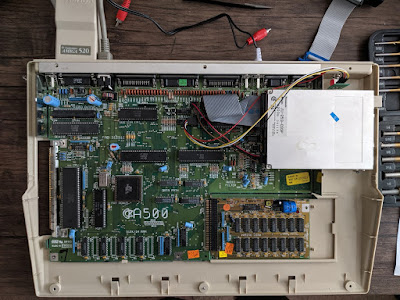 I chose the back left corner because there was nothing there other than a warning sticker. If someone really wanted to revert this computer to stock, they could either fill in the hole or put another sticker over it. This procedure is minimally invasive. 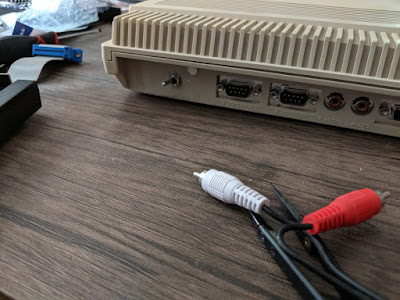 The switch doesn't look amazing there, and it sticks out further than I'd like. If I come across something less ugly, I'll replace it, but for now this works just fine. It was time to put everything back together. 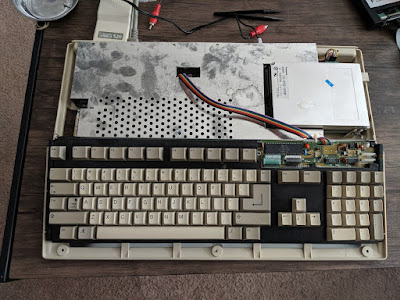 And really, it doesn't change the overall appearance, even internally. Considering it would give me access to gigabytes of storage, a slightly ugly switch on the back of the computer where I wouldn't normally see it is hardly a sacrifice.

Besides, when using the emulator, it's going to look like this, so whatever. But here's everything in its beautiful working glory. It was at this point I realized there's a crack in the top part of the case, so I'll need to fix that at some point in the future. 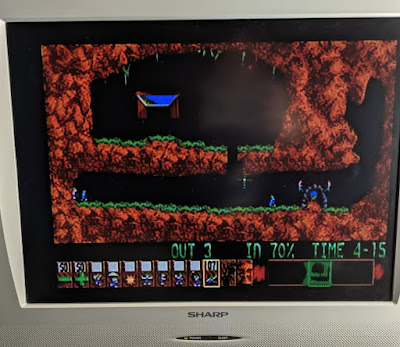 The first game I tested the emulator with was Lemmings because I played that game a lot as a child. It's got a great color scheme and runs buttery smooth with this setup.

There's more I'd like to do with the Commodore Amiga 500. It definitely needs a cleaning and retr0brighting, but I also hate the video adapter that came with it. It sticks out like six inches from the back of the computer and looks stupid. I'd like to find an HDMI solution, or at least some way of using fewer parts and cables.

Finding an NTSC Amiga computer was the hardest part of this project so far. The Amiga line were much more popular in Europe than the US, and they came out when PCs were starting to really take off. On top of the computer itself being very expensive, the components needed for the USB drive also weren't particularly cheap.
Posted by calaquin at 8:30 AM