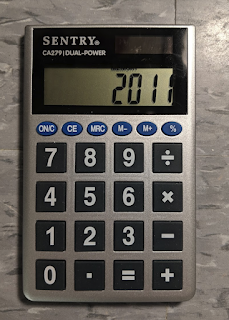 Hello again! I apologize for the lack of reviews, but I've dug myself into many other projects unrelated to calculators. The April 1st post had been set up a while back, and was posted automatically, so if you're confused as to why that's the only thing I've posted lately, there's why. But we're not here to talk about me, are we? We're here to discover how good a calculator is.
The Sentry CA279 Dual-Power calculator comes to us from the year 2011 by a company that makes audio technology now, Sentry Industries. There are no mentions of calculators to be found on their website, but based on the logo, it appears to be the same company. I don't know why they would try to distance themselves from this device because it's actually decent- for a cheap calculator.

The CA279 has extremely basic functionality and doesn't feature anything unique as far as calculators go. It adds, subtracts, multiplies, and divides integers and floats just fine, and it helps that the rubber buttons feel nice and the display is so large. It's dual-powered as well, and the one I purchased came with a corroded battery and still works.

I like the way it looks, and it feels pretty good in the palm of my hand.

Inside the device is unfortunate, however. This calculator is made from very cheap components, similar to the Big Display that I hate so much. The difference here is that the internal components are held together nicely and the exterior plastic probably won't crack after being gently tossed into a hard surface.

Is it a device I would recommend? Not really. Is it a device I'd warn my readers to not buy? Not that either. It's cheap but not disposable. I just don't have any strong feelings one way or another about the CA279. It won't be going into my Box of Lame™, and I've got plenty of room on my Wall of Fame, so it will go up there among other great devices until I find a reason to remove it.